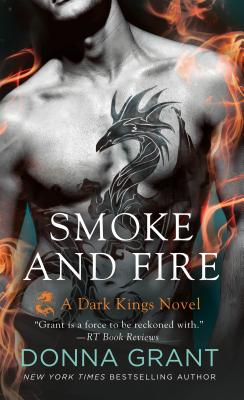 She wanted to touch him. There had always been something about being in his arms that made her feel as if she could tackle anything and the world wouldn’t dare get in her way…


SWORN TO PROTECT
A dragon shapeshifter and a computer mastermind, Ryder is sent to guard Glasgow after a devastating Dark attack. But when memories of an explosive affair come back to him—in the flesh—Ryder cannot help but want to protect the woman who haunts his dreams. Even if means shifting into the dragon he was never supposed to reveal...

DRIVEN TO DESIRE
Kinsey could never get enough of Ryder. His every touch only left her wanting more. But now that she’s seen him in his true form, Kinsey’s world is rocked to the core. She knows that to stay—and feel—alive, she must be with Ryder. But is Kinsey’s passion worth the risk of danger that comes with being a part of Ryder’s dark and fierce world?


Praise For Smoke and Fire: A Dark Kings Novel…