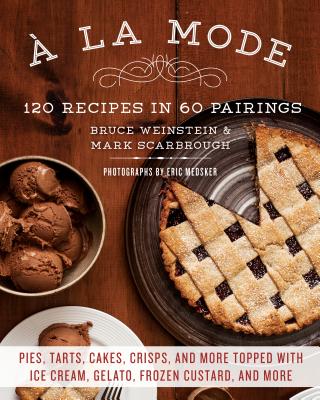 Are you ready to take your baking over the top? Here are sixty decadent and delightful ice creams and the sixty desserts that are their vehicles. A la Mode offers not just solid dessert recipes, from raspberry oat bars to bear claws, from chocolate pecan pie to a white chocolate pavlova, but also gives you the unforgettable pairings that make these desserts smash hits: apple cranberry pie with Camembert ice cream, chocolate sheet cake with salt caramel frozen custard, and espresso cream jelly roll with mascarpone ice cream.

Let's face it: vanilla can sometimes be so... vanilla. A great a-la-mode pairing should be as decadent as finding the perfect wine to go with your cheese plate. With A la Mode, IACP winners and cookbook dynamos Bruce Weinstein and Mark Scarbrough show you how to create innovative delights such as creamy hazelnut gelato atop coffee-poached pears, or maple frozen custard with a mouthwatering cinnamon roll cake, alongside simpler classics like confetti ice cream with layered vanilla birthday cake. You haven't lived until you've had peanut brittle pie with popcorn ice cream, a Cracker Jack fantasy!

Because what's a warm pie without ice cream? With A la Mode, you'll have to answer that question!

"[A] glorious and decadent collection. The authors aim for the sublime with their luscious pairings for ice cream, gelato, and sorbet, and they do not disappoint. They offer up recipes for drool-worthy pies and tarts, fruit desserts, cookies and bars, and cakes, each accompanied by an equally dreamy frozen treat specifically created for that baked good. The result is a jaw-dropping array of combinations that will amaze and delight. ... Ice cream lovers everywhere will rejoice in this wonderful and alluring new collection." - Publishers Weekly (starred review)

Mark Scarbrough is the writer and co-creator of All Times Favorite Sheet Cakes & Slab Pies with Bruce Weinstein. A former academic, he's sometimes snarky because he's ridiculously innocent in the marrow. He reads Dante for fun and hangs out in art museums on sunny afternoons. He's a bemused Texan in snow drifts, a dumbfounded progressive, and a self-confessed culinary snob. He still teaches literature on the side and leads raucous book groups at Connecticut libraries.

Bruce Weinstein is the chef and co-creator of All-Time Favorite Sheet Cakes & Slab Pies with Mark Scarbrough. A life-long New Yorker, he wanted to leave the city--so he now lives in rural New England. Don't ask. He can rip through Chopin Nocturnes, knits whenever he's not cooking, and is quick to ask "Who's up for a cocktail?" He went to "Fame" for high school, took off for chef school, and put in his time at Manhattan advertising firms. He loves Modigliani, is indifferent to Picasso, and has been forced to sit through more post-modern, avant-garde music than anyone should. His patience is boundless--except when it comes to bridge.
Loading...
or
Not Currently Available for Direct Purchase