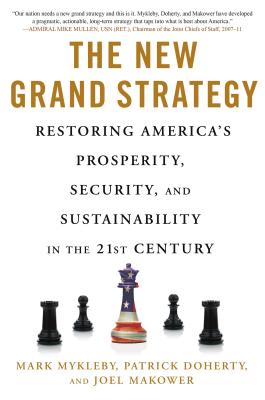 Restoring America's Prosperity, Security, and Sustainability in the 21st Century

The New Grand Strategy tells the story of a plan, born within the Pentagon, to recapture America’s greatness at home and abroad by elevating sustainability as our new strategic imperative. It aligns our enduring national interests of prosperity and security with a new framework that addresses pressing economic, social, and environmental issues at home, tapping into a trillion-dollar market demand for walkable communities, regenerative agriculture and resource productivity. It is an inspiring vision of what’s possible when Americans hold a collective view of the future and come together to bring it to reality.

This is no idealistic pipe dream or wonky policy prescription. The story that unfolds in this book weaves together hard-nosed economic analysis, a clear-eyed study of demographic and societal shifts, the realities of climate change and resource scarcity, a risk-based assessment of America’s challenges and opportunities, and on-the-ground reporting of how much this is already unfolding throughout the country. By rediscovering the power and discipline of grand strategy—and taking responsibility for our future—America can reimagine the American dream and once again take on “the cause of all mankind.”

Released during one of America’s most divisive presidential election campaigns, The New Grand Strategy avoids the partisan rhetoric dividing our nation today. Instead of placing blame, it offers a clear, pragmatic plan that can unite Americans and launch a new era of prosperity and security.


Praise For The New Grand Strategy: Restoring America's Prosperity, Security, and Sustainability in the 21st Century…

Our nation needs a new grand strategy and this is it. Mykleby, Doherty, and Makower have developed a pragmatic, actionable, long-term strategy that taps into what is best about America. In so doing, they’re giving us, as a nation of citizens, the opportunity to move past the politics, cynicism, and apathy that are holding us back so we can get on with the hard work of reinventing America for our kids and grandkids.—Admiral Mike Mullen (RET.), Chairman of the Joint Chiefs of Staff, 2007-11

Over time, America's soft power is more consequential around the world than our military might. Our soft power is linked profoundly to whether we are truly that shining city on a hill, admired for our freedom and the well-being of our people and the care we take for our children and future generations on this planet. The New Grand Strategy looks honestly at the sea of troubles in which America now finds itself, and, not stopping there, it charts an ambitious course to a better place. An important book.—James Gustave Speth, former Administrator, United Nations Development Program, and former Dean, Yale School of Forestry and Environmental Studies

America is a purpose-driven nation that has lost its way. It is no longer clear what we stand for either at home or abroad. The New Grand Strategy offers an answer, a grand purpose of creating a sustainable future for Americans and the peoples of all nations. The goal may be grand, but the analysis is clear, simple, and accessible. It should be read by all presidential candidates and all voters.—Anne-Marie Slaughter, President and CEO of New America; former Dean of Princeton University's Woodrow Wilson School of Public and International Affairs, Author of Unfinished Business

Mykleby, Doherty and Makower challenge us to move from inwardly focused belly-aching to outwardly-focused planning and mobilization. Thankfully, they envision the transformation being led by nimble free enterprise rather than clunky government. Planning the work and working the plan starts with careful thought about incentives and continues with a commitment to implementation. That's what The Grand New Strategy supplies.—U.S. Rep. Bob Inglis (R-SC4 1993-1999; 2005-2011)

B. H. Liddel Hart, the British military historian, described grand strategy as the application of a nation’s major resources to the achievement of its large purposes. In this new, comprehensive advocacy of a 21st century American grand strategy, authors Mykleby, Doherty, and Makower propose nothing short of a new American “operating system” based on the central organizing principle of “full-spectrum sustainability” and resilience founded on an economic revolution with grassroots in an astonishing compendium of local initiatives. Were the next president to adopt their blueprint for achieving our nation’s large purposes, it would launch us toward nothing less than a second American Revolution.—Gary Hart, United States Senator (Ret.)

There are many defining moments that are seen only in retrospect. This is not one of them. The confluence of internal and external factors has resulted in a defining moment for America — today — and we must act. The New Grand Strategy is the best blueprint I have seen for capturing and maximizing this moment. It offers us a clear, coherent and deeply compelling narrative to carry us thru the complexities we are facing. It is a fully actionable strategy that will allow America to adapt, compete, grow and evolve in a manner in line with our national values that transcend generations. It is truly inspiring and essentially the only bandwagon we need to be on.—Chris Luebkeman, Director, Global Foresight and Innovation, Arup

“America and the world are officially off course, but Mykleby, Doherty, and Makower show it is very fixable— a very competent and inspiring book.”—Jim Clifton, Chairman and CEO, Gallup

"A fascinating journey through the halls of power and public policy development."--800ceoread.com

Mark Mykleby is a senior fellow at the New America where he continues his work on grand strategy and sustainability. He was a second lieutenant in the Marine Corps and co-authored with Navy Captain Wayne Porter A National Strategic Narrative.

Joel Makower is chairman and executive editor of GreenBiz Group and author of more than a dozen books, including The New Grand Strategy, with coauthors Mark Mykleby, Patrick Doherty.
Loading...
or
Not Currently Available for Direct Purchase