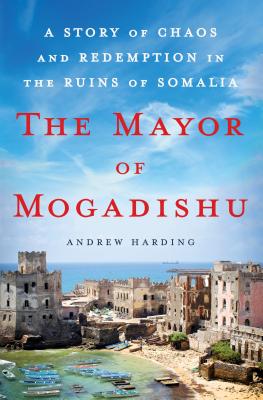 The Mayor of Mogadishu (Hardcover)

A Story of Chaos and Redemption in the Ruins of Somalia

"This is a triumph of a book: surprising, informative, and humane." —Alexander McCall Smith

"Pieces together Nur's astonishing biography and follows him when he became mayor in 2010 and tried to restore confidence and bring back investment to the battered Somali capital." —NPR

In The Mayor of Mogadishu, one of the BBC’s most experienced foreign correspondents, Andrew Harding, reveals the tumultuous life of Mohamoud “Tarzan” Nur - an impoverished nomad who was abandoned in a state orphanage in newly independent Somalia, and became a street brawler and activist. When the country collapsed into civil war and anarchy, Tarzan and his young family became part of an exodus, eventually spending twenty years in north London.

But in 2010 Tarzan returned, as Mayor, to the unrecognizable ruins of a city now almost entirely controlled by the Islamist militants of Al Shabab. For many in Mogadishu, and in the diaspora, Tarzan became a galvanizing symbol of courage and hope for Somalia. But for others, he was a divisive thug, who sank beneath the corruption and clan rivalries that continue, today, to threaten the country’s revival.

The Mayor of Mogadishu is a rare an insider’s account of Somalia’s unraveling, and an intimate portrayal of one family’s extraordinary journey.

ANDREW HARDING has been living and working abroad, as a foreign correspondent, for the past 25 years, in Russia, the Caucasus, Asia and Africa. He has been visiting Somalia since 2000. His television and radio reports for BBC News have won him international recognition, including an Emmy, an award from Britain’s Foreign Press Association, and other awards in France, Monte Carlo, the United States and Hong Kong. He currently lives in Johannesburg with his family.

Praise For The Mayor of Mogadishu: A Story of Chaos and Redemption in the Ruins of Somalia…

"An easy, enjoyable, and immensely insightful read, and should be on the summer reading list of everyone who follows Africa." —U.S. Current History Magazine

"Stunning ... great storytelling by a master reporter. .. Harding’s portrait of him [Nur] resembles a Somali version of Charles Dickens’ David Copperfield; the passages evoking 1960s street life in Mogadishu alone make the book worth reading. .... By the end of the book, most readers will find themselves rooting for Nur, Mogadishu, and Somalia." —Foreign Affairs

"Pieces together Nur's astonishing biography and follows him when he became mayor in 2010 and tried to restore confidence and bring back investment to the battered Somali capital." —NPR

"Intimate and nuanced.... The orphan-turned-thug-turned-entrepreneur-turned politician sees the possibilities and promise of Mogadishu, and his optimism makes anything seem possible. Harding's beautifully detailed writing brings it alive. I could almost feel the Indian Ocean breeze cool the city perched on Africa's horn." —NPR's Book Concierge

"Andrew Harding, one of the BBC’s most intrepid and empathetic journalists... has chronicled the extraordinarily uplifting life of one Somali, Mohamud Nur, nicknamed Tarzan . . . According to Mr Harding, Tarzan’s courage, inventiveness and resilience typify the finest qualities of the Somali people. It would be wrong, he insists, to give up hope." —The Economist

"I am truly inspired by this book. This is the best written and most well-articulated book about Somalia that I have ever seen. Any Somali reader, let alone non-Somalis, will learn so much about Mayor Tarzan, Mogadishu, and the nomadic Somali life style." —Abdirashid S. Ahmed, MPP, LGSW, East African Community Specialist, Minneapolis

“Africa can be explained in dry prose, in figures, in newspaper reports; or it can be explained, as Andrew Harding does in this book, through an astonishing personal story, vivid and utterly memorable. This is a triumph of a book: surprising, informative, and humane." —Alexander McCall Smith

"A stunning odyssey. Harding masterfully shows us there is no 'them' in the world – there is only 'us'." —J.M. Ledgard, author of Submergence

"Andrew Harding is one of the great foreign correspondents in any medium. He has a sympathy for Somalia and its people that shines through this powerful book. He disdains cliche and reductive analysis, in the process creating some of the most beautiful writing about Africa that I have ever read." —Fergal Keane, author of Road of Bones and Season of Blood

"One of Africa's most experienced correspondents zeroes in on one of the most intriguing characters in the extraordinary post-apocalyptic world of modern Mogadishu. Like the city and its mayor, Harding brings depth, clarity, nuance and occasional poetry to his story. Rich, epic and important." —Alex Perry, author of The Rift: A New Africa Breaks Free

“A wonderful account of one of the most troubled yet beautiful countries on Earth, told by one of our most gifted and sensitive journalists. This is a book laced with hope amid the dark layers of hatred through which the Mayor of Mogadishu battles." —Jon Snow, Channel 4 News, UK

"Andrew Harding's elegantly-written account is much more than a portrait of the Mayor of Mogadishu. In bold, vivid brush-strokes it captures all the charm, colour, contradiction and menace of contemporary Somalia." —Michela Wrong, author of Borderlines

"Andrew Harding has written a powerfully reported, sensitive book about a part of Africa that when thought of at all is usually considered simply forbidding. In Mayor of Mogadishu, he goes well beyond broad strokes to give us real life and whole and vivid characters." —Howard W. French, author of A Continent for the Taking: The Tragedy and Hope of Africa

"An excellent portrait of Somalia. Harding captures the agony the country has suffered for the last 25 years but also the strength, resilience and the humour of its remarkable people.” —Richard Dowden, author ofAltered States and Ordinary Miracles

"It is easy to gawk at the tragedy of Somalia; assuming an attitude of sensationalised disbelief. Andrew Harding refuses to do this. Instead he offers a wry, skeptical story. Part fable, part journalistic account, Harding's tale brims with sympathy and admiration for the human capacity for survival. The Mayor of Mogadishu is a great big gorgeous read." —Sisonke Msimang

"Harding brings this East African coastal country to vivid life...made up of tall, slender nomads whom he found 'impossibly, jaw-droppingly resilient' in the face of decades of hardship and violence...A beautifully rendered narrative and characterization portrays the soul of a country few Westerners truly understand." —Kirkus Reviews

"Captivating...With a fascinating protagonist and the riches-to-rags story told in an intimate and sympathetic manner without whitewashing the chaos of one of the most dangerous cities in the world, the book is a great read." —The East African

"[Harding] is fascinated by the city and how to make sense of it. In his new book, Mogadishu becomes legible through the biography of one man, Mohamed Nur, known as “Tarzan”." —The Times Literary Supplement

"The Mayor of Mogadishu is much more than the story of one ambitious Somali politician. It is the modern history of one of the world’s most troubled country, told with sensitivity, wisdom and compassion – and a rollicking good read besides." —The National

“Such an interesting read... It engulfs readers with its descriptive language.” —Judie Kaberia, Capital FM, Kenya

“I can’t recommend this book enough. Written by one of the best foreign correspondents of the past 25 years. An exceptional literary achievement.” —Eusebius McKaiser, Radio 702, South Africa

"Harding delicately, tenderly and honourably tackles the topic of Somalia...Harding’s use of imagery is particularly spectacular...The author’s sincere voice rings clearly throughout the book, offering the reader not just Tarzan’s story, but of his family’s, close associates and opponents’ views as well." —Kenya's The Nation

“The Mayor of Mogadishu is much more than the story of one ambitious Somali politician. It is the modern history of one of the world’s most troubled country, told with sensitivity, wisdom and compassion – and a rollicking good read besides.” —Justin Marozzi, author of Baghdad: City of Peace, City of Blood

"A fascinating, insightful book, it explores a sensitive yet deeply topical subject that we all too often hear very little about. Andrew delves into the story of Mogadishu and mayor Tarzan in an interwoven fashion that produces a beautifully written account of the ups and downs, highs and lows, that they have both undergone and the result is breathtaking. A necessary book for all interested in Somalia and wish to have an understanding that goes beyond the headlines.” —Dr Idil, Osman, Research Associate SOAS, UK

"A fascinating, insightful book. Harding delves into the story of Mogadishu and mayor Tarzan in an interwoven fashion that produces a beautifully written account of the ups and downs, highs and lows, that they have both undergone. The result is breathtaking." —Dr. Idil Osman, Research Associate, SOAS

"Lucidly and exquisitely written...a fascinating and well told story of a city, a nation, and a man who...could personify both city and nation." —Ali Ahmed