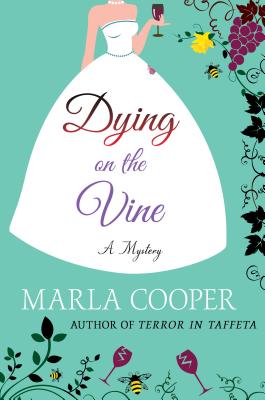 Dying on the Vine

When wedding planner Kelsey McKenna goes to the Wine Country Wedding Faire, the last thing she expects to do is take on new clients. After all, she’s just there to help out her friend Brody and maybe score some free cupcakes. But when a young couple in a pinch asks for her help, she just can't say no.

There’s only one problem: they’d been working with Babs Norton, the self-proclaimed Queen of Wine Country Weddings—and things did not end well. Kelsey wants to make sure there are no hard feelings, but unfortunately she never gets the chance. When she goes to Babs’ office, she finds the wedding planner dead on the floor.

Babs' high-strung assistant Stefan knows exactly who killed Babs: Kelsey. At least, that's what he very publicly accuses her of at Babs' funeral. When Kelsey decides to do a little sleuthing to clear her name, she uncovers a myriad of secrets and lies. And when a second wedding planner is attacked, Kelsey begins to wonder if she might be next.

Set against the stunning backdrop of California wine country, Marla Cooper's Dying on the Vine is a mystery brimming with gossip, wine, and, of course…murder.


Praise For Dying on the Vine: A Mystery (Kelsey McKenna Destination Wedding Mysteries #2)…

"The second in this cozy series offers both a behind-the-scenes look at what goes into making the perfect wedding and a surprisingly tricky mystery." —Kirkus Reviews

"Dying on the Vine is a hilarious blend of murder, mayhem, and matrimony. Marla Cooper's writing is as fresh and sparkling as a glass of champagne in this wine-country wedding cozy." —Stephanie Blackmoore, author of Engaged in Death

"A lot of blood, sweat, and tears can go into planning a destination wedding. Among all the normal hitches and emotional meltdowns, wedding planner Kelsey McKenna also manages to find a corpse or two, making Dying on the Vine a delectable cozy read. A lavish Napa Valley setting and a cast of engaging characters are a delight, while Marla Cooper’s breezy style is the icing on a gorgeous tiered cake. Readers will have a hard time putting down this book until they’ve devoured every morsel!” —Barbara Early, author of Death of a Toy Soldier

Praise for Terror in Taffeta

"This mystery novel is a real roller coaster with twists, turns and dips at every corner. Just when readers feel like they know who the bad guys are, their world is rocked by more information and more suspects. The end is unpredictable but believable and readers will be all too delighted to go on this ride that the author has masterfully crafted."—RT Book Reviews

"This cozy debut introduces a competent new amateur sleuth whose profession is sure to provide myriad problems along with a cast of quirky characters and plenty of motives and red herrings that keep you guessing."—Kirkus Reviews

"The lush setting adds appeal, and the destination-wedding frame gives the tale a kind of locked room dimension."—Booklist

"Marla Cooper is one funny lady. Her debut mystery, Terror in Taffeta, crackles with sharp writing and clever plot twists. I definitely say "I do" to this rollicking romp through a wedding from hell." —Laura Levine, author of Death by Tiara

"Feisty and funny, Marla Cooper's debut novel shines as she encapsulates the best the genre has to offer, with a quick-witted heroine, a puzzling page turner of a plot, and a cast of quirky characters like no other. I highly recommend this terrific first in a series!" —Jenn McKinlay, New York Times bestselling author of Dark Chocolate Demise

MARLA COOPER is the pen name of a professional writer who was written everything from advertising copy to travel guidebooks to the occasional haiku. While ghostwriting a book on destination weddings, she found inspiration for her first novel, Terror in Taffeta. Originally hailing from Texas, Marla now lives in Oakland, California, with her writer husband and her polydactyl tuxedo cat.
Loading...
or
Not Currently Available for Direct Purchase