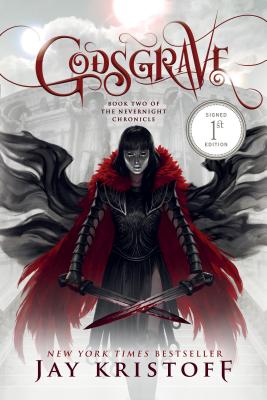 "Kristoff again graces his story with hilarious asides, vicious competition, and a protagonist as relentless as she is fearless. Her brutal world is populated with a fascinating array of characters who often meet dismal and bloody fates.... Through tragedy, betrayal, and victory, this glorious adventure thrills and satisfies with cold violence, terrifying monsters, roaring crowds, and bloody honor." —Publishers Weekly (starred review)

"I feel like I really can't do this book justice with words. But it is in fact bloodier, sexier, stabbier and badassier (just go with it) than Nevernight. Seriously, who knew that was even possible? Questions are answered, many more are asked and we are slowly fed more information about Mia's past." —The YA Circle blog on Godsgrave

"Kristoff has put together an excellent follow-up to Nevernight, and it will not disappoint....Things get more and more intense in just about every area of Mia's life, and it's all leading to a showstopping conclusion in book three. I'll be waiting for it!" —The Eater of Books blog on Godsgrave

"Godsgrave is intense and dark... There’s a lot of dynamic and strong characters especially the women. The last 80 pages will leave you shouting your head off and it’s never info dumped or out of left field.... If you like YA fantasy but want more sex and blood and language, read Nevernight and then quickly follow it with Godsgrave..." —Bang Bang Books blog on Godsgrave

"All I can say is "Wow!" I'm speechless with wonder, with awe at the twists and turns the story had taken. Though I'm expecting things not to go swimmingly for Mia, I never imagined the routes the plot would take to bring her to where she was by the end of the book." —The Romance Reviews blog

"I rate this book a glowing 5 out of 5 stars! Perfect for fantasy readers who love a badass heroine, assassins, action, and blood!" —The Introverted Book Nerd blog

"A very entertaining and well thought out story with a very readable main protagonist and her sidekick set at it’s heart.... It’s dark and twisted with a great streak of humour that softens some of the blows. An excellent start to series and one that I’m really looking forward to continuing with." —The Speculative Herald blog on Nevernight