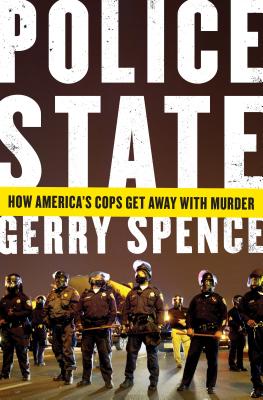 How does America, founded on the promise of freedom for all, find itself poised to become a police state?

In Police State, legendary "country lawyer" Gerry Spence reveals the unnerving truth of our criminal justice system. In his more than sixty years in the courtroom, Spence has never represented a person charged with a crime in which the police hadn't themselves violated the law. Whether by hiding, tampering with, or manufacturing evidence; by gratuitous violence and even murder, those who are charged with upholding the law too often break it. Spence points to the explosion of brutality leading up to the murder of Freddie Gray in Baltimore, insisting that this is the way it has always been: cops get away with murder. Nothing changes.

Police State narrates the shocking account of the Madrid train bombings - how the FBI accused an innocent man of treasonous acts they knew he hadn't committed. It details the rampant racism within Chicago's police department, which landed teenager Dennis Williams on death row. It unveils the deliberately coercive efforts of two cops to extract a false murder confession from frightened and mentally fragile Albert Hancock, along with other appalling evidence from eight of Spence's most famous cases.

We all want to feel safe. But how can we be safe when the very police we pay to protect us instead kill us, maim us, and falsify the evidence against us? Can we accept the argument that cops may occasionally overstep their boundaries, but only when handling guilty criminals and never with us? Can we expect them to investigate and prosecute themselves when faced with allegations of misconduct? Can we believe that they are acting for our own good? Too many innocent are convicted; too many are wrongly executed. The cost has become too high for a free people to bear.

In Police State, Spence issues a stinging indictment of the American justice system. Demonstrating that the way we select and train our police guarantees fatal abuses of justice, he also prescribes a challenging cure that stands to restore America's promise of liberty and justice for all.


Praise For Police State: How America's Cops Get Away with Murder…

“In his celebrated career Gerry Spence has not met a criminal that he didn't like or who was not the victim of police or judicial malfeasance. This book revisits his most celebrated cases, some of which represented law enforcement at its worst. It is written with passion, some literary license, and from the fascinating perspective of his interviews with his clients. While I disagree that we are marching towards a police state, Mr. Spence reminds us that no system is perfect. It demands vigilance and people like him to test it.” —Judge Judy

“A riveting account from the front lines of Gerry Spence's lifelong battle against injustice. He defines the thin line between the policeman and the criminal from his own experience, and it's disturbing and convincing.” —William Friedkin, Academy Award-winning director

“Obama said, 'This has been going on for a long time.' So, too, says Spence. Spence both exposes the old and proposes the new in ways that may well surprise and satisfy.” —Harrison Ford

“Gerry Spence's shocking experiences with rogue, killer police in his own cases prove his point, and he offers insightful new solutions that could assure a better tomorrow in the tragic struggle between law enforcement and the people they are sworn to protect.” —Alan K. Simpson, U.S. Senator, Wyoming (1979-1997)

“Those of us who have been in the hard world of defending against police who kill, lie, and cover it up know what Spence says is true. And his solutions are original and thought-provoking,” —Milton Grimes, Attorney to Rodney King

"Gerry Spence has written a terrific book on the problems with today's criminal justice system. Police State: How America's Cops Get Away with Murder gives us the best of Gerry Spence. Spence starts out by asking the basic question: "Are we safe from our own police?" What he really wants to ask, however, comes a bit later: "Are we safe from power?" Using tales of his brilliance in court, Spence answers those questions. No, we are not safe, and that is precisely why we need people like Gerry Spence to represent people in court."-- Laurie L. Levenson, Los Angeles Review of Books

Gerry Spence has been a trial attorney for more than five decades and proudly represents "the little people." He has fought and won for the family of Karen Silkwood, defended Randy Weaver at Ruby Ridge, and represented hundreds of others in some of the most notable trials of our time. He is the founder of Trial Lawyer's College, a nonprofit school where, pro bono, he teaches attorneys for the people how to present their cases and win against powerful corporate and government interests. He is the author more than a dozen books, including The New York Times bestseller How to Argue and Win Every Time, From Freedom to Slavery, Give Me Liberty, and The Making of a Country Lawyer, and is a nationally known television commentator on the famous trials of our time. He lives in Jackson Hole, Wyoming.
Loading...
or
Not Currently Available for Direct Purchase