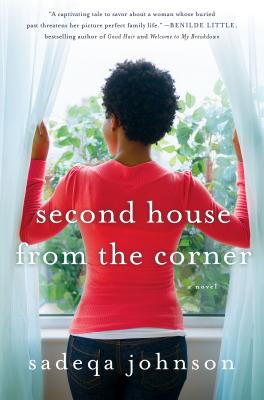 Second House from the Corner (Hardcover)

A Novel of Marriage, Secrets, and Lies

"A captivating tale to savor about a woman whose buried past threatens her picture perfect family life. Felicia is a wonderfully flawed, compelling main character, one who has stayed with me long after I finished the book. A winning novel from a writer to watch." -Benilde Little, bestselling author

Felicia Lyons, a ­­­­­­­ stressed out stay-at-home mom, struggles to sprint ahead of the demands of motherhood while her husband spends long days at the office. Felicia taps, utters mantra, and breathes her way through most situations, but on some days, like when the children won’t stop screaming her name or arguing over toy trucks and pretzel sticks, she wonders what it would be like to get in her car and drive away.

Then one evening the telephone rings, and in a split second the harried mother’s innocent fantasy becomes a hellish reality. The call pulls her back into a life she’d rather forget. Felicia hasn’t been completely honest about her upbringing, and her deception forces her return to the Philadelphia of her childhood, where she must confront the family demons and long buried secrets she thought she had left behind.

From a phenomenal fresh voice in fiction, comes the compelling story of what happens when the dream falls apart. Sadeqa Johnson's Second House from the Corner is an unforgettable tale of love, loss, rediscovery, and the growing pains of marriage.

Originally from Philadelphia, SADEQA JOHNSON currently resides in Virginia with her husband and three children. She is the author of Second House from the Corner.

Praise For Second House from the Corner: A Novel of Marriage, Secrets, and Lies…

"Sadeqa Johnson should take a bow for her latest effort. Fans of 2011's Love in a Carry-On Bag, her first offering, will devour every word." -Essence

"Rich with complex characters, this novel goes beyond a story of frazzled motherhood. The first-person narrative reads like a warm conversation, and the pace stays sharp and steady." -Romantic Times

"Johnson is a skilled storyteller with a breezy style, and the journey of Felicia, a strong African American woman, will have particular appeal for Terry McMillan fans." -Booklist

“Felicia is a protagonist that you’ll laugh with and cry for.” –Pride

"A captivating tale to savor about a woman whose buried past threatens her picture perfect family life. Felicia is a wonderfully flawed, compelling main character, one who has stayed with me long after I finished the book. A winning novel from a writer to watch." -Benilde Little, bestselling author

"I loved Second House from the Corner. Sadeqa was totally in my head at some times (with the mommy stuff!), and I found the ending really, really satisfying. Well earned." -23 Books You Should Read This Winter, Brenda Janowitz, PopSugar

"I loved the characters that Sadeqa Johnson created. The relationship between Faye and Preston was so loving and sexy and Johnson perfectly played out the typical male reaction when he finds that the woman he placed on a pedestal isn't the angel he always believed her to be. I also enjoyed Faye's relationships with her kids - the mature Rory, the needy middle child Twyla (and I loved her nickname, Two) and baby Liv. The author outdid herself with this book and I can't wait to see what she puts out next." -Read in Colour (4 stars)

"[An] excellent novel. She nails those days of rearing young children, how it's deeply rewarding and blindingly frustrating." -NJ.com