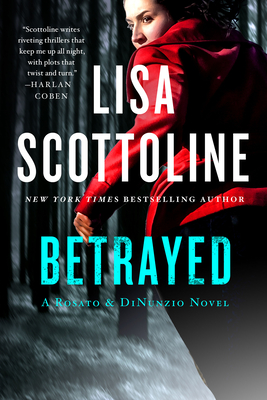 Blockbuster author Lisa Scottoline returns to the Rosato & Associates law firm with Betrayed, and maverick lawyer Judy Carrier takes the lead in a case that's more personal than ever.

Judy has always championed the underdog, so when Iris, the housekeeper and best friend of Judy's beloved Aunt Barb, is found dead of an apparent heart attack, Judy begins to suspect foul play. The circumstances of the death leave Judy with more questions than answers, and never before has murder struck so close to home.

In the meantime, Judy's own life roils with emotional and professional upheaval. She doesn't play well with her boss, Bennie Rosato, which jeopardizes her making partner at the firm. Not only that, her best friend Mary DiNunzio is planning a wedding, leaving Judy feeling left behind, as well as newly unhappy in her relationship with her live-in boyfriend Frank.

Judy sets her own drama aside and begins an investigation of Iris's murder, then discovers a shocking truth that confounds her expectations and leads her in a completely different direction. She finds herself plunged into a shadowy world of people who are so desperate that they cannot go to the police, and where others are so ruthless that they prey on vulnerability. Judy finds strength within herself to try to get justice for Iris and her aunt -- but it comes at a terrible price.

“Accused is a scorcher of a story...you'll be riveted till the very last page.” —Linda Fairstein on Accused

“Accused is Scottoline in top form.” —Time.com on Accused

“This is a long-awaited, solid entry into a terrific series that should appeal to fans of Sheldon Siegel, Rose Connors, and Steve Martini.” —Booklist on Accused

“Scottoline is at her best writing the "Rosato and Associates" stories and this latest is one of her best. Keep 'em coming, Lisa.” —Huffington Post on Accused

“One can almost hear the cheering from Scottoline's fans, including this reviewer, upon learning that the charming and often amusing ladies of Rosato & Associates have returned. Their personalities and antics burst from the pages, leaving readers wanting more.” —Portland Book Review on Accused

“Scottoline once again pushes a book beyond any arbitrary genre restrictions.” —CTNEWS.com on Accused

“After some rockin' stand-alones, Scottoline returns to her popular series about feisty all-female law firm Rosato and Assoc. Nice to have them back.” —People magazine on Accused

Lisa Scottoline is the New York Times bestselling author of over thirty novels including Look Again, Lady Killer, Think Twice, Save Me and Everywhere That Mary Went. She also writes a weekly column, “Chick Wit,” with her daughter Francesca Serritella, for The Philadelphia Inquirer. The columns have been collected in seven volumes, including Why My Third Husband Will Be a Dog and My Nest Isn’t Empty, It Just Has More Closet Space. Scottoline has won an Edgar® Award and Cosmopolitan magazine’s “Fun Fearless Fiction” Award, and she served as the president of Mystery Writers of America. She teaches a course on justice and fiction at the University of Pennsylvania Law School, her alma mater. She lives in the Philadelphia area.
Loading...
or support indie stores by buying on