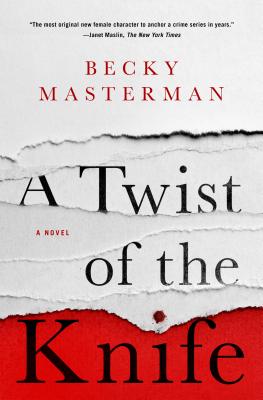 A Twist of the Knife (Hardcover)

"A crime novel that transcends the genre—a twisting, high-stakes story with characters so real and so recognizably human, that it breaks your heart a little. Brilliant."
-Shari Lapena, author of the New York Times bestseller The Couple Next Door

Ex-FBI agent Brigid Quinn, now happily settled in Tucson, doesn’t visit her family in Florida much. But her former partner on the force, Laura Coleman—a woman whose life she has saved and who has saved her life in turn—is living there now. So when Laura calls about a case that is not going well, Brigid doesn’t hesitate to get on a plane.

On leave from the Bureau, Laura has been volunteering for a legal group trying to prove the innocence of a man who is on death row for killing his family. Laura is firmly convinced that he didn’t do it, while Brigid isn’t so sure—but the date for his execution is coming up so quickly that they’ll have to act fast to find any evidence that may absolve him before it’s too late…

A Twist of the Knife, Edgar Award and CWA Gold Dagger finalist Becky Masterman’s third Brigid Quinn novel, is the masterful follow-up to Fear the Darkness and Rage Against the Dying.

BECKY MASTERMAN, who was an acquisitions editor for a press specializing in medical textbooks for forensic examiners and law enforcement, received her M.A. in creative writing from Florida Atlantic University. Her debut thriller, Rage Against the Dying, was a finalist for the Edgar Award for Best First Novel, the CWA Gold Dagger Award for Best Crime Novel of 2013, as well as the Macavity, Barry, and Anthony awards. She won the Tony Hillerman Fiction Award for A Twist of the Knife. Becky lives in Tucson, Arizona, with her husband.

Praise For A Twist of the Knife: A Novel (Brigid Quinn Series #3)…

“A gripping third entry of this powerhouse series.” — The Boston Globe

“Author Becky Masterman is as adept as her protagonist….Fantastic….A first sentence grabs you, a final sentence awes you, and most of the other sentences punch you in the face as well. The narrative is easy-reading, smooth and compelling.” —The Oklahoman

"Brigid Quinn is a force to be reckoned with. She’s smart, strong, refreshingly mature, witty as hell—and an absolute thrill to read."
—Linda Castillo

"What I love about these books is that they're page-turners, they're really thrilling novels."
—Nancy Pearl, NPR's "Morning Edition," on the Brigid Quinn series

“Edgar-finalist Masterman presents a compassionate, clear-eyed depiction of the painful foibles of human nature in her chilling, twist-filled third thriller….A compelling, complex lead, Brigid has no problem skirting the straight and narrow in her quest for justice.”
—Publishers Weekly

"Masterman deftly layers in Brigid’s family story....This page-turner, which tackles the rising tide of false death-row convictions and the long arm of family secrets, should be perfect for Lisa Gardner fans."
—Booklist

"A crime novel that transcends the genre—a twisting, high-stakes story with characters so real and so recognizably human, that it breaks your heart a little. Brilliant."
—Shari Lapena, author of the New York Times bestseller The Couple Next Door

"Brilliant, intricate, authentic and sometimes raw, this is a masterfully written story that'll quicken your pulse and challenge the grey matter too. Brigid Quinn is my new favourite female investigator."
—Gilly Macmillan

“The intrinsic intricacies of the case, coupled with the rising emotional tension stemming from Brigid’s family crisis…will compel both new readers and old fans to cheer Brigid on.”
—Library Journal

Additional Praise for Becky Masterman and the Brigid Quinn Novels:

"The most original new female character to anchor a crime series in years."
—Janet Maslin, The New York Times on Fear the Darkness

“When the nominations are made for the best crime-novel debut of the year, we should be hearing [Masterman's] name again.”
—The Washington Post on Rage Against the Dying

“Pulse-quickening...scorching...invigorating.”
—Janet Maslin, The New York Times on Rage Against the Dying

“Wow. An absolute pleasure. Chilling, smart...and what a voice.”
—Gillian Flynn, author of Gone Girl on Rage Against the Dying

“One of the most memorable FBI agents since Clarice Starling.”
—Publishers Weekly (starred, Pick of the Week) on Rage Against the Dying

“Masterman lives up to her name in this masterly combination of compelling character and plot.”
—Library Journal (starred) on Rage Against the Dying