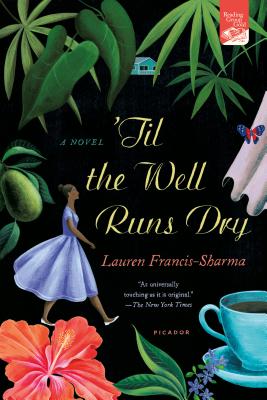 'Til the Well Runs Dry (Paperback)

A glorious and moving multigenerational, multicultural saga that sweeps from the 1940s through the 1960s in Trinidad and the United States. 'Til the Well Runs Dry opens in a seaside village in the north of Trinidad, where young Marcia Garcia, a gifted and smart-mouthed sixteen-year-old seamstress, lives alone, raising two small boys and guarding a family secret. When she meets Farouk Karam, an ambitious young policeman (so taken with Marcia that he elicits help from a tea-brewing obeah woman to guarantee her ardor), the rewards and risks in Marcia's life amplify forever. On an island rich with laughter, calypso, Carnival, cricket, beaches, and salty air, sweet fruits and spicy stews, the novel follows Marcia and Farouk from their sassy and passionate courtship through personal and historical events that threaten Marcia's secret, entangle the couple and their children in a tumultuous scandal, and put the future in doubt for all of them.

Lauren Francis-Sharma, a child of Trinidadian immigrants, was born in New York City and raised in Baltimore, Maryland. She holds a bachelor’s degree in English literature with a minor in African-American Studies from the University of Pennsylvania and a J.D. from the University of Michigan Law School. She lives in the Washington, D.C., area with her husband and two children. 'Til the Well Runs Dry is her first novel.

Praise For 'Til the Well Runs Dry: A Novel…

“Marcia's story, told lovingly in this, Francis-Sharma's debut novel, is as universally touching as it is original.” —The New York Times (Sunday Book Review Shortlist)

“You'll hear the calypso music in this vivid debut about a spirited seamstress and devoted mother with a family secret.” —People

“Have you ever met a family whose every tear, every triumph, every heartbreak made your heart leap? I could not put this book down. An unforgettable journey.” —Dolen Perkins-Valdez, author of the New York Times bestseller Wench

“Lauren Francis-Sharma is a true story-teller.‘Til the Well Runs Dry burns through its telling like the best gossip, but has the controlled mystery of a fairytale. This narrative is surprising, winding and always gratifying.” —Tiphanie Yanique, author of Land of Love and Drowning

“'Til The Well Runs Dry is unforgettable. Like the best poetry, it has all the high notes: a beautiful girl, a spell that leads to love and death, and a terrible secret -- in language pierced with the cries and colors of the West Indies. But this is not just a story; it's the author's retelling of her own origins. Sweet, brutal, and unsparing, this is Lauren Francis-Sharma's first book, yet she commands the page.” —Jacquelyn Mitchard, author of the #1 New York Times bestseller The Deep End of the Ocean

“An evocative and emotionally resonant family saga with one of the most compelling heroines I've met in a long time. A story of love, loss, and triumph set in a world of secret and moral consequence. Like the Obeah woman in her story, Lauren Francis-Sharma has cast a spell that refuses to release me. I won't forget this story or the voice of this wonderful new writer any time soon.” —Brunonia Barry, New York Times bestselling author of The Lace Reader

“‘Alone, I sat on the sand and took in the beauty of my grandmother's land' was the reason Lauren Francis-Sharma gave for writing her remarkable debut ‘Til The Well Runs Dry. I was swept away by this thunderous, witty, and deeply soulful novel about family, Trinidad, secrets, porch sitters, dirt roads and passion. And so satisfying, like the first time I read my aunt's novel, Their Eyes Were Watching God.” —Lucy Anne Hurston

“A first novel, yes. But balanced with experiences, imagery, and characters that linger on the flesh. Eyes. In the heart. And as I read the last paragraph and closed the book, I knew that I had experienced an amazing journey of light. Thank you my dear sister for this wonderful book.” —Sonia Sanchez, poet and writer

“I devoured ‘Til the Well Runs Dry in three short nights. I couldn't wait to get back to the stories and the characters who I almost didn't want to be fiction, because I cared so much about their ever-after. I found Lauren Francis-Sharma's world, so familiar to me, a place with hidden corners hiding deep secrets I couldn't wait to unravel and then to have my breath pause as they revealed themselves in ways I couldn't imagine. Her story might be about a girl from Blanchisseuse, but above that it is an extraordinary story about a misunderstood girl who knows how to stand her ground.” —Victoria Brown, author of Minding Ben

“With an intense voice, Lauren Francis-Sharma draws us into old Trinidad, weaving a classic immigrant's tale, punctuated with the heady scents and rhythms of a bygone time, carrying us to the new world.” —Cheryl Lu-Lien Tan, author of A Tiger in the Kitchen

“Lauren Francis-Sharma's debut novel, 'Til the Well Runs Dry, illuminates a complex and beautiful Trinidad… [And] at the heart of 'Til the Well Runs Dry is Marcia Garcia's delightful, eccentric story of several decades, several children, much resilience, many secrets, romance, and harrowing immigration. In 'Til the Well Runs Dry, Lauren Francis-Sharma has gone looking for her own personal history and has written as well an important narrative celebrating the African and South Asian people who created Caribbean culture.” —Breena Clarke, bestselling author of River, Cross My Heart and Angels Make Their Hope Here

“Francis-Sharma's breathtaking debut . . . is as stunning as the artwork on the cover. She creates a heroine in Garcia that readers will root for--and remember fondly. This story of one woman's journey of womanhood and discernment is not to be missed.” —Sergie Willoughby, The Network Journal

“A saga ripe with heartbreak and joy . . . Francis-Sharma delivers a rich and satisfying debut on the ties of family, love, and culture.” —Kirkus Reviews

“Lauren Francis-Sharma takes us to the island of Trinidad, the ‘Land of the hummingbird,' in a story that feels like a song, with a chorus of voices across generations, revealing a culture as vibrant and enriching as it is overlooked by those on the mainland.” —Henry Louis Gates, Jr., Alphonse Fletcher University Professor, Harvard University

perspective of one of three characters. Why do you think

the author chose these three characters to tell the story,

rather than picking one protagonist? How do you think

this choice enhanced the storytelling?

a secret from Farouk, knowing that some version of the story could get

back to Farouk sooner or later?

Why do you think, out of all of her children, Marcia was the hardest

Freedom vs. commitment are large themes in this book. How does

a desire for freedom inform each character’s story? What role does

commitment play in limiting their desire for freedom?

Farouk wanted badly to take Marcia away from Blanchisseuse, yet

day trip there. Why was it so important for him to go back?

What do you think was the reason behind Patsy’s rebellion?

in the story, Marcia had taken pride in keeping a clean house; what

does the messy home symbolize?

“who’s always looking to find a way out.” Do you think this was true?

What impact do these words have on Marcia?

For Marcia, New York symbolized risk. How did going to New York

change her? Were you shocked when she went to visit Mrs. Silverman’s

a second time? Why or why not?

Were you surprised when you found out about the brothers? How do

America. Why, after all the mistreatment she suffered, does Marcia

still feel as if bringing her children to America is the right decision?