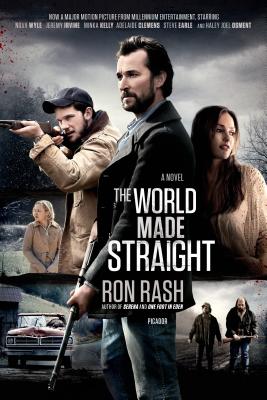 "ONE OF THE MAJOR WRITERS OF OUR TIME." -- THE ATLANTA JOURNAL-CONSTITUTION

Travis Shelton is seventeen the summer he wanders into the woods onto private property outside his North Carolina hometown, discovers a grove of marijuana large enough to make him some serious money, and steps into the jaws of a bear trap. After hours of passing in and out of consciousness, Travis is discovered by Carlton Toomey, the wise and vicious farmer who set the trap to protect his plants, and Travis's confrontation with the subtle evils within his rural world has begun.
Before long, Travis has moved out of his parents' home to live with Leonard Shuler, a one-time schoolteacher who lost his job and custody of his daughter years ago, when he was framed by a vindictive student. Now Leonard lives with his dogs and his sometime girlfriend in a run-down trailer outside town, deals a few drugs, and studies journals from the Civil War. Travis becomes his student, of sorts, and the fate of these two outsiders becomes increasingly entwined as the community's terrible past and corrupt present bear down on each of them from every direction, leading to a violent reckoning—not only with Toomey, but with the legacy of the Civil War massacre that, even after a century, continues to divide an Appalachian community.
Vivid, harrowing yet ultimately hopeful, The World Made Straight is Ron Rash's subtlest exploration yet of the painful conflict between the bonds of home and the desire for independence.


Praise For The World Made Straight: A Novel…

“An intellectually satisfying work of suspense . . . Reminds us of the sort of compelling literature a brave artist can fashion from the shards of such experience.” —Los Angeles Times Book Review

“Ron Rash writes some of the most memorable novels of this young century . . . No writer since the late Larry Brown has handled the raw grit of country people as truthfully as Rash. . . . At once uplifting, harrowing, and unforgettable.” —The News & Observer

“[Ron Rash's] novels are complex and compelling, told in graceful, conscientious prose, and The World Made Straight is his finest yet.” —The Charlotte Observer

“This is the third novel by Ron Rash that has brought my life to a grinding halt--but to praise Rash simply as a powerful storyteller would be to overlook his gifts as a profoundly ethical writer and, at the same time, a poet with a fine and tender eye for the beauty of nature. What I love and admire most of all about this book, however, is its fierce confrontation of a human dilemma that has sparked too many of the world's most violent tragedies: the burning question of just how much allegiance we owe family and community, including the ghosts from our past.” —Julia Glass, author of Three Junes

“The World Made Straight is a wonderful, heartbreaking, heart-healing kind of work, a work of genius--genius and insight and poetry and the kind of language that whispers to me like music coming back off dense wet hills and upturned faces.” —Dorothy Allison, author of Bastard Out of Carolina

“Rash writes with beauty and simplicity, understanding his characters with a poet's eye and heart and telling their tale with a poet's tongue.” —William Gay, author of Provinces of Night

“Ron Rash writes so well about real people, people one paycheck short of extinction, that you care what happens to his characters in every clause. In A World Made Straight, he shows how much trouble a poor ol' boy can get in, just trying to catch a fish or two. Even in this novel, his words sound like poetry.” —Rick Bragg, author of All Over but the Shoutin' and Ava's Man

“Deft, intelligent, crisp, sensual and lyrical, The World Made Straight is the best work yet by a wonderful writer. This is why we read books: to encounter a great story told well.” —Rick Bass

Ron Rash is the author of the prize-winning novels One Foot in Eden, Saints at the River and The World Made Straight, as well as several collections of poetry and short stories. He is the recipient of an O. Henry Prize and the James Still Award from the Fellowship of Southern Writers. For Saints at the River he received the 2004 Weatherford Award for Best Novel and the 2005 SEBA Best Book Award for Fiction. Rash holds the John Parris Chair in Appalachian Studies at Western Carolina University and lives in Clemson, South Carolina.
Loading...
or support indie stores by buying on
(This book is on backorder)