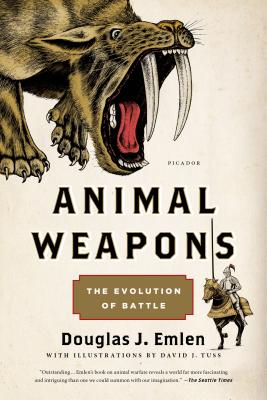 The Evolution of Battle

"Outstanding . . . Emlen's book on animal warfare reveals a world far more fascinating and intriguing than one we could summon with our imagination." -The Seattle Times

Every animal relies on a weapon of some kind-cats have claws, eagles have talons, even the dogs we keep as pets have a respectable set of teeth. In rare cases, we find species whose weapons have become stunningly outsized, some with tusks so massive that those who wield them look like they should collapse under the weight. In Animal Weapons, biologist Douglas Emlen pulls readers into the worlds of these remarkable beasts, trekking through rainforests and mountain passes to unravel the mysteries of their weapons. Along the way, Emlen shows that the essential biology of animal arms races applies to our own weapons, too. A story that begins with biology becomes the story of all weapons, as Emlen seeks to determine where this parallel leaves us today, in a world filled with the deadliest weapons of all time-nuclear, biological, and chemical weapons of mass destruction.


Praise For Animal Weapons: The Evolution of Battle…

“Through personal stories, historical narrative, and detailed sketches, biologist Emlen charts the evolution of animal weapons so bizarre and gargantuan, it's amazing they even exist.” —Discover magazine

“Outstanding . . . Emlen's book on animal warfare reveals a world far more fascinating and intriguing than one we could summon with our imagination.” —The Seattle Times

“A great deal of the living world really is red in tooth and claw. That important principle has needed a real biologist to illustrate and explain it, now accomplished dramatically by Emlen.” —Edward O. Wilson, Pulitzer Prize–winning scientist, Harvard University

“Emlen's excellent writing will draw in readers intrigued by astonishingly powerful weapons, both in the wild and in the military, and how they have evolved owing to selective pressures.” —Library Journal (starred)

“Absorbing . . . Throughout the book, Emlen's demonstrations of the many parallels between human and animal weapons are fascinating, even when the possibilities are frightening . . . Emlen is not a hurried or simplistic storyteller. He is a writer of nuance, and he traveled to many different environments to get the story.” —Kirkus

“Emlen infuses scientific explanations with entertaining anecdotes from his field research at the University of Montana. Each step of the way, he provides parallels with human weapon development and design, from ancient civilizations to weapons of mass destruction, and the evolutionary process of animals. While his conclusions about the human arms race are dire, it is his description of animal weaponry in action and in evolution that will captivate.” —Publishers Weekly

“One of our leading evolutionary biologists, Doug Emlen, delves into the deep meaning of entities as different as beetle horns and medieval castles, to take the reader on a joyous ride of discovery about nature and the human experience. Animal Weapons is an authoritative, knowledgeable, and epic narrative of one of the dominant themes of life on earth, including our own. Emlen's curiosity, passion, and storytelling prowess make this magisterial little volume leap from the page.” —Neil Shubin, author of Your Inner Fish

“This is a great read not only for the stories of conflicts and weaponry in a diversity of animals, but also for the history of human weaponry, and the highly relevant message about arms races the author reads from both.” —Bernd Heinrich, author of Winter World and Why We Run

“Animal Weapons is must read, especially those of us who are interested and concerned about human weapons development. As Douglas Emlen shows definitively, arms races are not something we as a species invented, but instead the most natural thing in the world.” —Robert L. O'Connell, author of The Ghosts of Cannae and Fierce Patriot

“Doug Emlen has done a superb job of bringing together the stories of animal and human weapons. He makes the biology behind the evolution of weapons understandable for this soldier and engineer, and convincingly illustrates the human animal's problems in controlling or avoiding catastrophe in the age of weapons of mass destruction.” —Lieutenant General John Myers

Douglas J. Emlen is the recipient of the Presidential Early Career Award in Science and Engineering from the Office of Science and Technology Policy at the White House, multiple research awards from the National Science Foundation, including their five-year CAREER award, and a Young Investigator Prize and the E. O. Wilson Naturalist Award from the American Society of Naturalists. His research has been featured in outlets including the New York Times and National Public Radio’s Fresh Air. He is a professor at the University of Montana.

David J. Tuss is a graphic artist who specializes in blending technical accuracy with vivid, lifelike compositions. His work is also featured in textbooks, scientific articles, and technical biology papers. He lives in Helena, Montana, where he works as a wilderness ranger, natural science illustrator, and public school science and art teacher.
Loading...
or
Not Currently Available for Direct Purchase