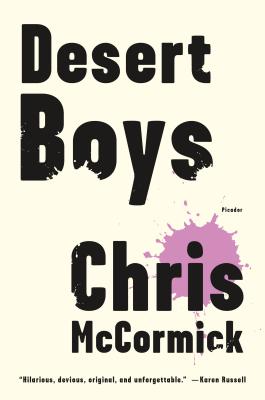 Longlisted for the Chautauqua Prize

A vivid and assured work of fiction, from a major new voice, following the life of a young man growing up, leaving home, and coming back again, marked by the start beauty of California's Mojave Desert and the various fates of those who leave and those who stay behind.

This series of powerful, intertwining stories illuminates Daley Kushner's world - the family, friends and community that have both formed and constrained him, and his new life in San Francisco. Back home, the desert preys on those who cannot conform: an alfalfa farmer on the outskirts of town; two young girls whose curiosity leads to danger; a black politician who once served as his school's confederate mascot; Daley's mother, an immigrant from Armenia; and Daley himself, introspective and queer. Meanwhile, in another desert on the other side of the world, war threatens to fracture Daley's most meaningful - and most fraught - connection to home, his friendship with Robert Karinger.

A luminous debut, Desert Boys by Chris McCormick traces the development of towns into cities, of boys into men, and the haunting effects produced when the two transformations overlap. Both a bildungsroman and a portrait of a changing place, the book mines the terrain between the desire to escape and the hunger to belong.

"Desert Boys takes some familiar coming-of-age tropes—sensitive kid grows up a square peg in a round-hole town, breaks away for college and leaves his childhood pals behind—and refreshes them with precise observation and love of storytelling....'Mother, Godfather, Baby, Priest' is a head-spinning, technically adept piece of writing."—San Francisco Chronicle

“A debut novel-in-stories set in the Mojave Desert that is at once deeply felt and formally bold. The voice especially, wise and vulnerable by turns, contributes to a haunted coming-of-age narrative.”—Ploughshares

"Set against the backdrop of a Mojave Desert filled with paintballs, Joshua trees, and rusted out Volkswagen buses, McCormick’s debut probes topics as harsh as the desert landscape. Citizenship, class, family, love, masculinity, and war all factor into the plot....Utterly poignant and breathtakingly heartfelt, Chris McCormick’s Desert Boys is a stunning debut from a promising voice in contemporary fiction."—Lambda Literary Review

"A beautiful, and sometimes rending, debut with a certain ineffable quality that will haunt you well past the end. It may also make you consider your own place in the universe, as well as all the competing forces that fix you there."—Refinery29 (Best Books of the Year)

“Occasionally a fresh, exciting voice rings out over the cacophony of mediocrity, and one can sigh with renewed confidence in the publishing world: here is a very good writer. Such is the case with Chris McCormick in Desert Boys..Does where we come from define who we are and determine our future? No easy answers are provided, but for McCormick, the passion lies in the struggle."—The Bay Area Reporter

“Desert Boys is a novel in pieces, an artfully rendered collage… McCormick writes to the specific but evokes the universal.”—Las Vegas Weekly, 4 out of 5 stars

“[McCormick] knows the Antelope Valley, and he understands and loves the people who choose to stay there…. Chris McCormick's great accomplishment in his first novel is that he is able to combine these places and emotions in deeply moving yet entirely unsentimental stories.” —Ann Arbor Observer

“Tender, heartfelt, fully realized stories about family, friendship, and love.… When we leave Antelope Valley we immediately want to go back, so achingly good are these beautifully conceived stories.”—Kirkus Reviews (starred)

“Desert Boys is hilarious, devious, original, and unforgettable; Chris McCormick writes with a joyful swerve and swagger that is all his own.”—Karen Russell, New York Times bestselling author of Vampires in the Lemon Grove

“Desert Boys is a show off's debut, the work of an unabashed polyglot. There seems to be nothing Chris McCormick can't do: smartypants metafictional experiment, heart-pounding thriller, eulogy for boyhood bonds, meditation on sexuality and post-9/11 intolerance. These linked stories assemble into a kind of compound eye through which we glimpse an oft-forgotten corner of California and, most superbly, a fresh take on masculine Americana. McCormick is the artsy outsider, the affectionate anthropologist, the near-feral boy with a wide-angle lens of history.”—Claire Vaye Watkins, author of Battleborn and Gold Fame Citrus

"In the hands of this young master of purified prose, ambition, love, and the restlessness of boyhood are trapped as if in a crystal vial. No reader will be able to turn away."—Chigozie Obioma, author of The Fishermen

“Chris McCormick’s book is a gift from the new West. In the dry, highland exurbs of Los Angeles and other exotic places, McCormick crafts lustrous tales of brotherhood, immigrants, love, and paintball. Filled with unforgettable characters, Desert Boys is a deeply moving journey through the natural and emotional landscapes of the American present.”—Héctor Tobar, New York Times bestselling author of Deep Down Dark and The Barbarian Nurseries

“This is a book about place, or really like so many books about place (Dubliners, Winesburg, Ohio) two places, in this case two Californias—San Francisco on the one hand; the less familiar but finely evoked small desert community from which the narrator originates on the other. But it's also a book about shame, two shames, the shame of where we come from, and the shame of leaving it. Through a series of quietly intimate confessions we learn how torn the teller is between past and present, small town and big city, and McCormick captures this tension beautifully in the contrast between his laconic, but frankly feeling prose and his restless formal innovation. Wise and vulnerable by turns, this is a quietly stunning debut.”—Peter Ho Davies, author of The Welsh Girl

"Bold and intoxicating, McCormick’s stories redefine manhood in the face of war, longing, and escape."—Booklist

"Engaging...The stories in which Daley, known in the book as Kush, interacts with his friends have a shaggy, circuitous, random feeling—a combination of edge and aimlessness that believably evokes adolescent anomie and angst....A lovely, quiet book by a promising new voice."—Publishers Weekly

CHRIS McCORMICK is the author of the debut story collection Desert Boys, winner of the 2017 Stonewall Book Award-Barbara Gittings Literature Award. Originally from the California side of the Mojave Desert, he earned his MFA at the University of Michigan, where he was the recipient of two Hopwood Awards. He is currently an assistant professor at Minnesota State University, where he's at work on his second book, a novel.
Loading...
or support indie stores by buying on