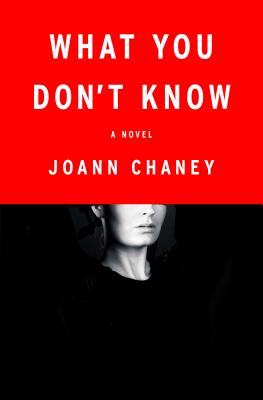 What You Don't Know

"Superb characters, sparkling dialogue, and a gripping, terrifying plot, plus flashes of humor to boot; JoAnn Chaney's What You Don't Know has it all." --Chris Pavone, New York Times bestselling author of The Travelers

He didn’t take their lives -- but he ruined them.

The final victims of an infamous serial killer may be the ones he didn’t kill.

Hoskins cracked the case of one of the most infamous serial killers -- and then it cracked him. He’s in cold cases, as is his career.

Sammie was the lead reporter who broke the story, but now she’s selling makeup at the mall. She wants back on page 1.

Gloria claims she was the unsuspecting wife. She didn’t know a thing.

And as new murders shake Denver, this is a final chance to get their lives back.


Praise For What You Don't Know: A Novel…

“One of the most well-written thrillers I've ever read."
—BookRiot

“Striking…In this perverse first novel, the exploits of a murderer are viewed from three perspectives: that of his wife, who still loves him; that of a journalist, who made her career because of him; and that of a police detective who is still obsessed with him.”
—New York Times Book Review (Best and Latest in Crime Fiction)

“Outstanding dark debut…it paints an absorbing, graphic portrait of the dangers of getting too close to evil, and is breathtaking from the first page to the last.”
—Daily Mail

"Superb characters, sparkling dialogue, and a gripping, terrifying plot, plus flashes of humor to boot; this book has it all. It's very hard to believe this is Ms. Chaney's first novel."
—Chris Pavone, New York Times bestselling author of The Travelers

“JoAnn Chaney's book, mysterious with all that is concealed and undeclared, compels the reader to acknowledge that things are not as simple as we like to believe, and to recognize that evil does not always lay outside of us, but deep within us. Chaney's psychological insights and social perceptions are infallible—brutal, indignant, and full of surprise.”
—Susanna Moore, bestselling author of Paradise of the Pacific

"In What You Don't Know, JoAnn Chaney beautifully analyzes the effect a monster can have on those in their orbit and how, in the need to catch one, so much is revealed about the monsters we hide in ourselves. A masterclass in character study, a beautifully woven story, and truly chilling at its core, this is a literary crime novel not to be missed!"
—Sarah Pinborough, bestselling author of Behind Her Eyes

“Crisp, dark, brutal and worth every nightmare it gave me. Chaney’s serial killer is chilling, her characters are humanly flawed, and her story is intense which creates the perfect recipe for a page-turner.”
—BookRiot

“Unusually thoughtful…Relies more on character studies than gory details…It’s the escalating psychological tension and the interactions of three-dimensional characters that lift this well above the serial-killer norm.”
—Kirkus

“This chilling debut novel balances the evil with some good, the gruesome with a bit of humor, while keeping tensions high and readers riveted to the pages.”
—RT Book Reviews

“A careful study in characters and deception...I read this book with my breath held and the lights on."
—Electric Literature

JoAnn Chaney is a graduate of UC Riverside’s Palm Desert MFA program. She lives in Colorado with her family. What You Don't Know is her first novel.
Loading...
or
Not Currently Available for Direct Purchase