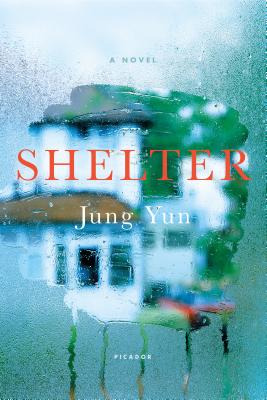 "Shelter is domestic drama at its best, a gripping narrative of secrets and revelations that seized me from beginning to end."—Viet Thanh Nguyen, Pulitzer Prize-Winning author of The Sympathizer

A few miles away, his parents, Jin and Mae, live in the town’s most exclusive neighborhood, surrounded by the material comforts that Kyung desires for his wife and son. Growing up, they gave him every possible advantage—private tutors, expensive hobbies—but they never showed him kindness. Kyung can hardly bear to see them now, much less ask for their help. Yet when an act of violence leaves Jin and Mae unable to live on their own, the dynamic suddenly changes, and he’s compelled to take them in. For the first time in years, the Chos find themselves living under the same roof. Tensions quickly mount as Kyung’s proximity to his parents forces old feelings of guilt and anger to the surface, along with a terrible and persistent question: how can he ever be a good husband, father, and son when he never knew affection as a child?

As Shelter veers swiftly toward its startling conclusion, Jung Yun leads us through dark and violent territory, where, unexpectedly, the Chos discover hope. Shelter is a masterfully crafted debut novel that asks what it means to provide for one's family and, in answer, delivers a story as riveting as it is profound.

"In Shelter, Jung Yun takes Tolstoy’s idea that every unhappy family is unhappy in its own way and packages it in the most familiar expression of the American Dream: owning a home. What the parents and children in this novel discover is that they can neither take shelter in their houses nor their families. This is domestic drama at its best, a gripping narrative of secrets and revelations that seized me from beginning to end."—Viet Thanh Nguyen, Pulitzer Prize-Winning Author of The Sympathizer

"Yun’s powerful and tautly written novel is a brave and engrossing meditation onan adult child’s need to reckon with his past in order to be free."—Min Jin Li, Asia House

"A searing and beautifully written novel that still haunts me—I found it hard to put it down...Jung Yun elevates ordinary suffering and shame into literary art with an unflinching honesty."—The International Examiner

“With each page, Yun takes us deeper into Kyung’s troubles…As the crime drama unfolds in the background, Yun expertly explores what it means to be an immigrant in America, the true value of tradition, the parent-child bond, what makes a good marriage, and the need for forgiveness… Yun introduces us to a man riddled with anger and self-doubt, leaving the reader to judge whether time can truly mend what’s broken.”—BookPage

Jung Yun was born in Seoul, South Korea and grew up in Fargo, North Dakota. Her debut novel, Shelter was long-listed for the Center for Fiction’s First Novel Prize, a finalist for the Barnes & Noble Discover Great New Writers Award, and a semi-finalist for Good Reads’ Best Fiction Book of 2016. She was a MacDowell fellow, and her work has appeared in The Atlantic, The Washington Post, and Tin House, among others. Currently, she resides in Baltimore, and serves as an assistant professor of English at the George Washington University in Washington, D.C.
Loading...
or
Not Currently Available for Direct Purchase