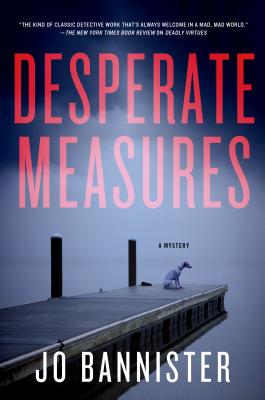 When Gabriel Ash's wife and kids were kidnapped four years ago by Somali pirates, his life spiraled out of control. He left his job working for the British government and moved to a small town where he descended into near madness. But with the help of his dog, Patience, and his friendship with young police officer Hazel Best, his focus returned. So when he discovers that his wife is still alive, Ash is once again filled with hope and fear. Hope that he has another chance to find her and their two young sons; fear that, in trying, he may bring about their deaths.

Hazel is deeply worried for Ash. But even she is unprepared for what Ash seems willing to do to secure the safety of his wife and children. In fact, nothing is as it seems and loyalty, friendship, and family bonds will be called into question. When Ash learns who was behind the events that wrecked his life and his sanity, even the resourceful Hazel might not be able to keep him from getting hurt. How much is Ash willing to sacrifice in order to bring his family home and bring justice to those responsible?

Jo Bannister's police procedurals are widely praised for outstanding plotting and suspense, and their brilliant and compelling characterization. Desperate Measures, the third novel in the series following Deadly Virtues and Perfect Sins, is an engrossing novel from "one of the undersung treasures of the mystery genre." -The Chicago Tribune

"After a cliff-hanger ending in Perfect Sins, Bannister’s third series outing finds police officer Hazel Best and her friend Gabriel Ash in a state of disbelief. Ash’s kidnapped wife, Cathy, has made contact; the Somali pirates holding her are willing to make a deal for her return, but it is not one that either Ash or Hazel can live with. Desperate to get his family back, Ash comes up with a plan he shares with no one, to Hazel’s dismay. When ­Hazel sees the results of Ash’s actions, she is shocked into making big decisions of her own that will change both their lives forever. ­VERDICT Bannister stays true to her reputation for excellent police procedurals. Readers will be unable to put down this latest tale of suspense." —Library Journal

Jo Bannister started her career as a journalist after leaving school at sixteen to work on a local weekly newspaper. Shortlisted for several prestigious awards, she was editor of the County Down Spectator for some years before leaving to pursue her writing full time. She is the author of the Brodie Farrell mystery series, which began with Echoes of Lies (2001).
Loading...
or
Not Currently Available for Direct Purchase