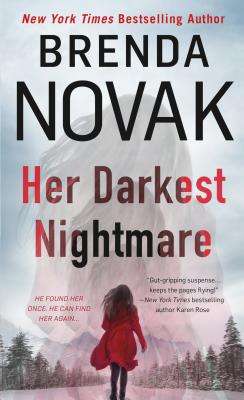 THE HUNT FOR A SERIAL KILLER

Evelyn Talbot knows that a psychopath can look perfectly normal. She was only sixteen when her own boyfriend Jasper imprisoned and tortured her—and left her for dead. Now an eminent psychiatrist who specializes in the criminal mind, Evelyn is the force behind Hanover House, a maximum-security facility located in a small Alaskan town. Her job puts her at odds with Sergeant Amarok, who is convinced that Hanover is a threat to his community…even as his attraction to beautiful Evelyn threatens to tear his world apart.
BEGINS WITH AN ESCAPE FROM HER PAST

Then, just as the bitter Alaskan winter cuts both town and prison off from the outside world, the mutilated body of a local woman turns up. For Amarok, this is the final proof he needs: Hanover has to go. Evelyn, though, has reason to fear that the crime is a personal message to her—the first sign that the killer who haunts her dreams has found her again. . .and that the life she has so carefully rebuilt will never be the same…

BRENDA NOVAK and her husband, Ted, live in Sacramento and are the proud parents of five children—three girls and two boys. When she's not spending time with her family or writing, Brenda is usually working on her annual fund-raiser for diabetes research, a cause for which she's raised $2.6 million so far. Her novels have made the New York Times and USA Today bestseller lists and won many awards, including eight Rita nominations, the Book Buyer's Best, the Book Seller's Best and the National Reader's Choice Award.
Loading...
or
Not Currently Available for Direct Purchase