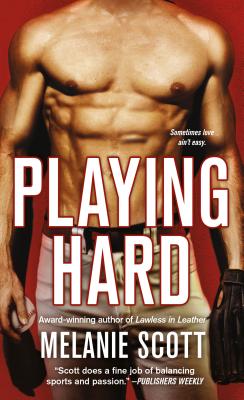 HIS GAME NEVER FAILS...
Baseball star Oliver Shields has always lived for the game-and now the New York Saints have finally made the play offs. The season isn't over yet, but meeting gorgeous Amelia Graham seems like a bonus grand slam-until one night of partying threatens to take Oliver out of the game for good...

UNTIL SHE puts his heart in play...
All work and no play has always been Amelia's motto, earning her a coveted job on Wall Street and the freedom she's always longed for. Oliver is a real player-in more ways than one-and a distraction she doesn't need, especially when she's trying to win a chance at her dream assignment at work . When flirtation turns to attraction so fierce neither one of them can say good-bye, will Oliver and Amelia step up to the plate-and give love a chance?

"Sexy...[with] emotional intensity."
-Kirkus Reviews on The Devil in Denim

MELANIE SCOTT, who also writes as M.J. Scott, grew up in a family of avid readers who fostered her love of words. A long time reader of fantasy and romance, it was inevitable that her own stories combine the two genres. Her unpublished novels have won a number of awards including the Romance Writers of Australia's Emerald Award and Valerie Parv Award and the Romance Writers of New Zealand's Clendon Award. She is a two-time finalist in the Romance Writers of America Golden Heart® Award. Shadow Kin, her debut novel, won praise from three New York Times bestselling authors. All three books in her Half-Light City series have been finalists in the Australian Romance Readers Association Awards. She lives in Melbourne, Australia, where she distracts herself with books, cats, and yarn when she's not writing.
Loading...
or
Not Currently Available for Direct Purchase