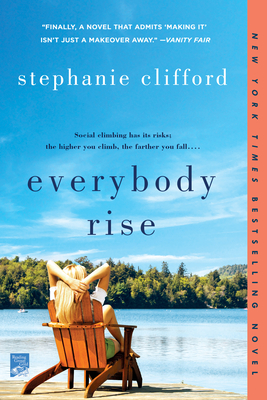 “In her debut novel, Clifford deftly updates The House of Mirth to show that belonging to the social elite is still not for the faint of heart. Evelyn Beegan has grown up on the fringes of high society, but now a new job at an exclusive social networking website may be her ticket to the lush life. Just as Wharton's Lily Bart learns the hard way, fitting in with the 'who's who' takes some shrewd negotiation. Is it worth the compromise just to prove you're worthy to be 'somebody'? Clifford's characters are complex and the choices they make follow intriguing paths in this engaging and moving story.”
— Kerry Spaulding (W), University Book Store, Mill Creek, WA
View the List

“Finally, a novel that admits ‘making it’ isn't just a makeover away.” -Vanity Fair

Twenty-six-year-old Evelyn Beegan intended to free herself from the influence of her social-climbing mother, who propelled her through prep school and onto New York’s stately Upper East Side. Evelyn has long felt like an outsider to her privileged peers, but when she lands a job at a social-network startup aimed at the elite, she has no choice but to infiltrate their world. Soon she finds herself navigating the promised land of Adirondack camps, Hamptons beach houses, and, of course, the island of Manhattan itself. Intoxicated by the wealth, access, and influence of her new set, Evelyn can’t help but try to pass as old money herself. But when the lies become more tangled, she grasps with increasing desperation as the ground beneath her begins to give way.

A sparkling debut that is “full of ambition and grit” (Emma Straub), Stephanie Clifford's Everybody Rise is a story about identity and loss, and how sometimes we have to lose everything to find our way back to who we really are.

Praise For Everybody Rise: A Novel…

“A superb debut. Everybody Rise is a 21st century version of a grand 19th century novel--a smart, moving tale of class, ambition, and identity.” —Malcolm Gladwell

“A compulsive, up-close-and-personal read about the first cracks in the greed-and-bleed U.S. economy that went flying off the rails so spectacularly a short time later.” —Library Journal