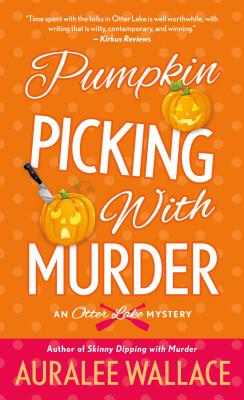 When murder strikes in the Tunnel of Love, Erica Bloom has to rock the boat to catch a killer…

For a small town like Otter Lake, New Hampshire, the annual Fall Festival is a big deal: a Ferris wheel, corn maze, caramel apples, and pumpkin pies—even a Tunnel of Love. Back in her hometown, Erica Bloom is trying to enjoy herself, which includes getting better acquainted with Sheriff Grady Forrester. But when a swan boat sails out of the heart-shaped exit of the tunnel with a dead man slumped over a wing, her own romance will have to take a backseat.

Speaking of love affairs, the other passenger in the boat—and only witness to the elderly Mr. Masterson’s swan song—is not his wife. It’s Erica’s beloved and feisty “aunt,” Tweety, who quickly becomes the prime suspect. Vowing to clear Tweety, Erica teams up with her sassy BFF and self-appointed security expert Freddie Ng to solve the murder—despite the objections of Grady, who’s convinced the amateurs are going overboard in their investigation. And he just may be right. But as Erica and Freddie start to dredge up long-kept small-town secrets, will they heading straight into troubled waters?


Praise For Pumpkin Picking with Murder: An Otter Lake Mystery…

"The Otter Lake series is absolutely one of my favorite cozy mystery series. It's funny, charming, clever, and unique, and I highly recommend it." — The Bookkeeper's Apprentice

"Pour yourself a big mug of hot cider, curl up in front of the fire, and settle in for a little bit of romance, a little bit of mystery, and a whole lot of wild and wacky fall festival adventures." —Nights and Weekends