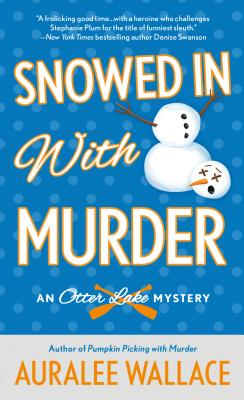 Snowed In with Murder

There’s no retreat and no surrender when Erica Bloom finds herself stuck in a snow storm with a stone-cold killer. . .


Erica has returned to Otter Lake, New Hampshire, to rekindle her romance with Sheriff Grady Forrester at her mom’s island retreat, currently closed for the off season. Just ahead of a rapidly advancing storm front, Erica arrives to discover Mom has rented the lodge to a reality TV show. They’re filming the wealthy but awful Boatright brood, who’ve been summoned here by their patriarch because—so he says—one of them wants to kill him.

SNOWED IN WITH MURDER
Great television, terrible timing. Not only are Erica’s romantic hopes snuffed out like a candle flame, the nasty Nor’easter just became a superstorm…and no one is getting off the island ’til it blows over. When the power fails, it’s lights out for the patriarch. Now, marooned with a murdered millionaire and his feuding family, it’s up to Erica to take the killer by storm and get back to the business of reuniting with Grady—until death do they part!


“Time spent with the folks in Otter Lake is well worthwhile, with writing that is witty, contemporary, and winning.”—Kirkus Reviews

Don't miss Snowed In with Murder, part of the hilarious Otter Lake series by Auralee Wallace!


Praise For Snowed In with Murder: An Otter Lake Mystery…