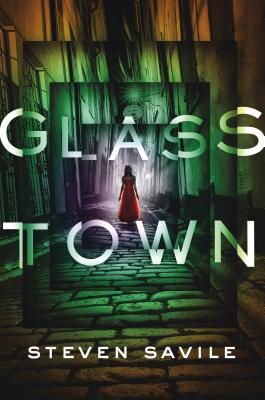 Steven Savile is an international sensation, selling over half a million copies of his novels worldwide and writing for cult favorite television shows including Doctor Who, Torchwood, and Stargate. Now, he is finally making his US debut with Glass Town, a brilliantly composed novel revolving around the magic and mystery lurking in London.

In 1924, two brothers both loved Eleanor Raines, a promising young actress from the East End of London. She disappeared during the filming of Alfred Hitchcock’s debut, Number 13, which itself is now lost. It was the crime of the age, capturing the imagination of the city: the beautiful actress never seen again, and the gangster who disappeared the same day.

Generations have passed. Everyone involved is long dead. But even now their dark, twisted secret threatens to tear the city apart.

Joshua Raines is about to enter a world of macabre beauty, of glittering celluloid and the silver screen, of illusion and deception, of impossibly old gangsters and the fiendish creatures they command, and most frighteningly of all, of genuine magic.

He is about to enter Glass Town.

The generations-old obsession with Eleanor Raines’s unsolved case is about to become his obsession, handed down father-to-son through his bloodline like some unwanted inheritance. But first he needs to bury his grandfather and absorb the implications of the confession in his hand, a letter from one of the brothers, Isaiah, claiming to have seen the missing actress. The woman in the red dress hadn’t aged a day, no matter that it was 1994 and she’d been gone seventy years.

The magic that destroyed one of the most brutal families in London’s dark history is finally failing, and Joshua Raines is about to discover that everything he dared dream of, everything he has ever feared, is waiting for him in Glass Town.

"With a vivid London setting and a tantalizing dose of cinematic history (including Alfred Hitchcock's lost directorial debut), this dark fantasy should appeal to fans of Neil Gaimain." —Library Journal

“Bursting with imagination, Steven Savile’s Glass Town is a twisted, breathless unraveling of inter-generational magic and mystery. With its intrigue twined around early film studios, romantic obsession, and the dark secrets of London, it’s a book that feels written just for me. I loved it!” —Christopher Golden, New York Times bestselling author of Ararat and Snowblind

"A luminescent love letter to London, the movies, and the darker corners of the human heart." —Michael Marshall Smith, New York Times and international bestselling author of Straw Men

“Steven Savile has the gift of making the unbelievable completely believable, and leading you willingly into an illusory world that you can touch, feel and smell...but can you trust?” —Graham Masterton, Edgar Award and Bram Stoker Award-winner

"A beautifully rendered tale of magic, family, and dark secrets set against the backdrop of London that may or may not exist in the real world, Steven Savile's Glass Town is the novel everyone will be talking about come December. This gem is not to be missed!" —Ronald Malfi, Bram Stoker Award nominee

"There are killer ideas at work in this cleverly plotted, relentlessly inventive supernatural thriller that evokes the best of Clive Barker or Ramsey Campbell. Highly recommended." —Alan Baxter, author of the Alex Caine series and Crow Shine

"Fans of Clive Barker will eat this up and idolize Savile's new breed of monsters." —Weston Ochse, author of the award-winning SEAL Team 666 series

"Steven Savile has always been a name to watch, but with Glass Town I think I can safely say we've seen a gigantic leap forward in the writing style of a writer I already admired. Glass Town is filled with realistic, fully fleshed characters to love, and hate and with fantastic creations that will both delight and horrify. An absolute triumph of a novel from one of the new masters of the modern fantasy!" —James A. Moore, author of the Seven Forges and Tides of War series

"In Glass Town, Steven Savile brilliantly creates an alternate reality that impinges chillingly upon our own. Old and new magicks blend in eerily rendered present and past Londons populated by magicians, old school criminals, legendary actresses, and crooked cops. The fantastic elements are engaging, the horrific scenes terrifying. You'll never again be able to watch the films of a certain classic comedy team without feeling a shiver. It's about time the US became aware of Savile, and this is the perfect novel to introduce him to our shores." —Chet Williamson, Edgar Award nominated author of Pyscho: Sanitarium, the official sequel to Robert Bloch's Psycho

"Here’s a story ripped from ancient fragile celluloid: a tale told in harsh chiaroscuro, where ghost-women step judderingly from zoetropes to suck you dry and dogs in negative will drain you. It’s all about light and shadow, and the lenses that make stories out of such stuff; it’s about a lost movie, lost time, lost streets, a lost actress. A family torn apart through generations by a single obsession. Passion in monochrome, suffering in colour." —Chaz Brenchley, award-winning author of Bitter Waters

“Stories of loss and punishment, but even at his darkest Savile has a flair for finding beauty in the macabre, using usually-subtle horror to deliver a succession of poignant insights into love and humanity….striking and moving…” —The Guardian (UK) on Time’s Mistress

“One of the most seriously creepy pieces it has been my pleasure to read in a long time.” —Charles de Lint on Remember Me Yesterday

“With Silver, Steven Savile delivers a barn storming tale of action, intrigue and suspense in a plot laced with ancient secrets and modern terror.” —Matt Hilton, author of the Joe Hunter thrillers

“Savile's in a league of his own” —Jeremy Duns, author of Free Agent and Free Country on Silver

“Savile doesn’t even need to dig deep to produce material this dark, this deadly.” —Paul Finch, bestselling author of Stalkers on Parallel Lines

“A work of genius a tightly plotted, edge-of-your-seat thriller.” —Karen Dionne, author of The Marsh King's Daughter on Parallel Lines

“Ingenious, crafty and compelling. A great entertainment with no punches pulled.” —Stephen Gallagher, creator of Crusoe, Eleventh Hour and The Forgotten television shows on Parallel Lines

Steven Savile has twice been nominated for the British Fantasy Society Award for best short story and best original fiction collection, and was runner up in 2000 for his editorial work on Redbrick Eden, Scaremongers 2, which raised funds for the homeless charity SHELTER in the UK. He is the author of Glass Town and Silver, and lives in Stockholm, Sweden, where he also teaches.
Loading...
or
Not Currently Available for Direct Purchase