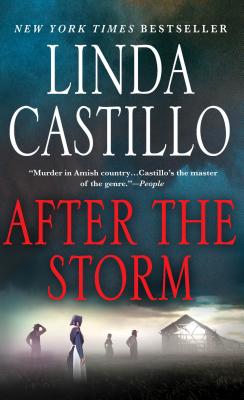 After the Storm (Mass Market)

A NATURAL DISASTER SHEDS SOME LIGHT ON A DECADES-OLD MURDER IN THE LATEST THRILLER FROM NEW YORK TIMES BESTSELLING AUTHOR LINDA CASTILLO.

When a tornado tears through Painters Mill and unearths human remains, Chief of Police Kate Burkholder is tasked with the responsibility of identifying the bones and notifying the family. When evidence emerges that the death was no accident, Kate soon finds herself plunged into a thirty-year-old case that takes her deep into the Amish community to which she once belonged.

Meanwhile, turmoil strikes close to home as Kate’s budding relationship with state agent John Tomasetti reaches the breaking point. Can they weather the storm that threatens to tear them apart? Under siege from an unknown assailant—and her own personal demons—Kate digs deep into the case only to discover proof of an unimaginable atrocity, a plethora of family secrets and the lengths to which people will go to protect their own.

“castillo skillfully weaves the attitudes and habits of the Amish…[a] clear, dramatic portrait.”—BOokpage

Linda Castillo is the New York Times bestselling author of the Kate Burkholder novels, including Sworn to Silence which was adapted into a Lifetime Original Movie titled An Amish Murder starring Neve Campbell as Kate Burkholder. Castillo is the recipient of numerous industry awards including a nomination by the International Thriller Writers for Best Hardcover, the Daphne du Maurier Award of Excellence, and a nomination for the RITA. In addition to writing, Castillo’s other passion is horses. She lives in Texas with her husband and is currently at work on her next novel.
or support indie stores by buying on
(This book is on backorder)
Copyright © 2020 American Booksellers Association