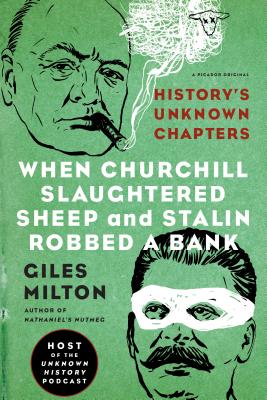 When Churchill Slaughtered Sheep and Stalin Robbed a Bank

More addictive and mind-blowing true tales from history, told by Giles Milton—one of today’s most entertaining and accessible yet always intelligent and illuminating historians

In When Churchill Slaughtered Sheep and Stalin Robbed a Bank, the second installment in his outrageously entertaining series, History’s Unknown Chapters, Giles Milton shows his customary historical flair as he delves into the little-known stories from history, like when Stalin was actually assassinated with poison by one of his inner circle; the Russian scientist, dubbed the “Red Frankenstein,” who attempted to produce a human-ape hybrid through ethically dubious means; the family who survived thirty-eight days at sea with almost no water or supplies after their ship was destroyed by a killer whale; or the plot that served as a template for 9/11 in which four Algerian terrorists attempted to hijack a plane and fly it into the Eiffel Tower.

Giles Milton is the internationally bestselling author of over ten works of narrative history published in twenty-five languages, including Soldier, Sailor, Frogman, Spy, Airman, Gangster, Kill or Die: How the Allies Won on D-Day; Churchill’s Ministry of Ungentlemanly Warfare, which is being developed into a major TV series; and Nathaniel’s Nutmeg, serialized by the BBC. He lives in London and Burgundy.
Loading...
or
Not Currently Available for Direct Purchase