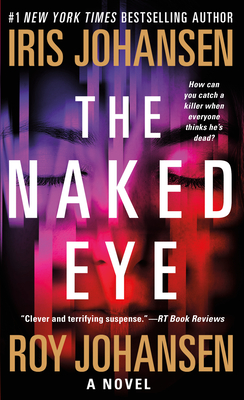 The #1 New York Times bestselling author Iris Johansen and the Edgar Award-winning author Roy Johansen are back with a new a new novel in The Naked Eye featuring Kendra Michaels-hired gun for both the CIA and FBI.

ONLY ONE WOMAN CAN SEE...
Kendra Michaels was instrumental in bringing serial killer Eric Colby to justice. And despite his apparent execution at San Quentin, Kendra is convinced that Colby is still alive. The problem is that she can't prove it. Even her razor-sharp powers of observation-developed to an amazing capacity during the twenty years she spent blind, and now in constant demand by law enforcement agencies-have gotten her nowhere.

THAT A KILLER IS HIDING IN PLAIN SIGHT
But then a reporter who very publicly humiliated Kendra is murdered. Visiting the crime scene in search of anything that might link the brutal homicide to Colby, Kendra instead finds evidence that points to her. Finally, Colby's master plan becomes clear to her: he is framing Kendra for murder. Suspicions mount and Kendra dives into a lethal mission to clear her name and catch the killer no one believes exists anymore. A killer who is always nearby, watching...whose trail of destruction is invisible to the naked eye...and whose intentions only Kendra can see.


Praise For The Naked Eye: A Novel (Kendra Michaels #3)…

“A thrill-a-minute, chill-a-minute thriller that keeps reader[s] on the edge of their seats.” —Reader to Reader on Sight Unseen

“Shocking...with a vibrant cast of characters to hold the reader's attention throughout.” —Fresh Fiction on Sight Unseen

Iris Johansen is the New York Times bestselling author of Chasing the Night, Blood Game, Eve, and Eight Days to Live, among others. She began writing after her children left home for college, and first achieved success in the early 1980s writing category romances. In 1991, she began writing suspense historical romance novels, and in 1996 she turned to crime fiction, with which she has had great success. She lives near Atlanta, Georgia.

Roy Johansen is an Edgar Award--winning author and the son of Iris Johansen. He has written many well-received mysteries, including Deadly Visions, Beyond Belief, and The Answer Man.
Loading...
or support indie stores by buying on