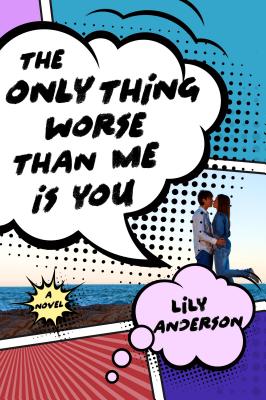 The Only Thing Worse Than Me Is You

Trixie Watson has two very important goals for senior year: to finally save enough to buy the set of Doctor Who figurines at the local comic books store, and to place third in her class and knock Ben West--and his horrendous new mustache that he spent all summer growing—down to number four.

Trixie will do anything to get her name ranked over Ben's, including give up sleep and comic books—well, maybe not comic books—but definitely sleep. After all, the war of Watson v. West is as vicious as the Doctor v. Daleks and Browncoats v. Alliance combined, and it goes all the way back to the infamous monkey bars incident in the first grade. Over a decade later, it's time to declare a champion once and for all.

The war is Trixie's for the winning, until her best friend starts dating Ben's best friend and the two are unceremoniously dumped together and told to play nice. Finding common ground is odious and tooth-pullingly-painful, but Trixie and Ben's cautious truce slowly transforms into a fandom-based tentative friendship. When Trixie's best friend gets expelled for cheating and Trixie cries foul play, however, they have to choose who to believe and which side they're on—and they might not pick the same side.

Stephanie Perkins meets 10 Things I hate About You in The Only Thing Worse than Me Is You, a fresh, romantic debut from author Lily Anderson inspired by Much Ado About Nothing.


Praise For The Only Thing Worse Than Me Is You: A Novel…

"[The Only Thing Worse Than Me Is You] is written in a such a bright and unique voice, making it a hidden gem amongst other contemporary novels.... A sweet treat from start to finish, satisfying my love for adorable romance, delightful characters, and all things nerdy. “To read or not to read”: if that is your question, than I implore you to get your hands on this superhero-cupcake of a novel as soon as you can." —The Young Adults, on the B&N Teen Blog

"Full of modern-day fandoms, such as Doctor Who, Buffy the Vampire Slayer, Star Wars and Marvel comics... [and with] lovable, relatable, and realistic characters...that fans of Rainbow Rowell's Eleanor & Park or Fangirl will enjoy." —Library Journal

“A geeky Shakespearean retelling that tosses [Much Ado About Nothing] into a comic book store. The result is a hilarious contemporary romance that pays tribute to everything in the geek canon, from Firefly to Doctor Who.” —Paste, “The 16 Best Young Adult Books of 2016 (So Far)”

"There’s a lot to enjoy in debut novelist Anderson’s geek-positive update of Much Ado About Nothing, including intense comic book fandom, a cheating scandal, student council drama, themed dances, and two central characters engaged in an epic love-hate relationship. Readers familiar with the Shakespeare will enjoy Anderson’s riffs on the original’s plot points as Trixie and Ben get their nerdily-ever-after ending." —Publishers Weekly

“The adaptation is spot on, the witty banter is quoteworthy…brain candy for the brainy crowd.” —The Bulletin for the Center for Children’s Books

"Debut author Anderson updates Shakespeare’s Much Ado about Nothing with impressive nerdisms and stinging wordplay." —Booklist

“This is the kind of book that would get lost with you in a comic book shop. It would stay up late with you for a midnight release movie. It would let you practice your moves in a fighting game, before things got started. Basically, this book is the geeky best friend you've always wanted. A hilarious, heartfelt book that treats pop culture and Shakespeare with the same reverence and adoration, The Only Thing Worse than Me Is You a perfect geeky read that I wish I'd had in high school. If you could rate books on a scale of comic book conditions, this book would be MINT.” —Eric Smith, blogger and author of The Geek’s Guide to Dating

“This was a super fun retelling of Much Ado! I absolutely loved the voice in this book and the banter was A+++++.” —Ashley Herring Blake, author of Suffer Love

“I raced through the arc of this fast paced, smart, funny high school mystery inspired by Much Ado About Nothing! Trixie Watson's senior year at her high school for the gifted and talented goes wildly awry. First, her lifelong nemesis has a surprising change of heart about her and second, a cheating scandal involves one of her closest friends. Trixie’s evolving romance was pitch perfect and the mystery of the cheating kept me hooked until the last page. This is a sweet, intelligent and clever story. The dialogue is phenomenal! Highly, highly recommend!” —Karen Fortunati, author of The Weight of Zero

“I loved The Only Thing Worse than Me Is You. It’s not only fun and witty—it’s also generous and big-hearted. And as a bonus, it’s thoroughly appreciated of fandom culture AND has good parental relationships.” —Jennifer Mason-Black, author of Devil and the Bluebird

Lily Anderson is the author of several novels for young adults including The Only Thing Worse Than Me Is You, Not Now Not Ever, and Undead Girl Gang. A former school librarian, she is deeply devoted to Shakespeare, fairy tales, and podcasts. Somewhere in Northern California, she is having strong opinions on musical theater.
mslilyanderson.com