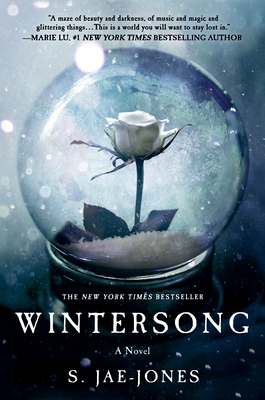 "Darkly romantic and atmospheric in all of the best ways, this book reads like a fever dream you never want to wake from." —Emily A. Duncan, New York Times bestselling author of Wicked Saints and Ruthless Gods

Dark, romantic, and unforgettable, Wintersong is an enchanting coming-of-age story for fans of Labyrinth and Beauty and The Cruel Prince.


The last night of the year. Now the days of winter begin and the Goblin King rides abroad, searching for his bride…

All her life, Liesl has heard tales of the beautiful, dangerous Goblin King. They’ve enraptured her mind, her spirit, and inspired her musical compositions. Now eighteen and helping to run her family’s inn, Liesl can’t help but feel that her musical dreams and childhood fantasies are slipping away.

But when her own sister is taken by the Goblin King, Liesl has no choice but to journey to the Underground to save her. Drawn to the strange, captivating world she finds—and the mysterious man who rules it—she soon faces an impossible decision. And with time and the old laws working against her, Liesl must discover who she truly is before her fate is sealed.

Rich with music and magic, S. Jae-Jones's Wintersong will sweep you away into a world you won’t soon forget.

"This was Labyrinth by way of Angela Carter. Deliciously romantic, with a nuanced Goblin King and a strong heroine, this story was rife with fairy tales, music, and enchantment." —Roshani Chokshi, New York Times bestselling author of The Star-Touched Queen


Praise For Wintersong: A Novel…

“The legend of the cruel and pitiless Erl-king anchors a darkly lush and dangerous tale of a stifled young woman’s creative awakening. Beautiful writing evokes powerful emotions in this journey into the meaning of sacrifice and the power of love.”—Kate Elliott, New York Times bestselling author of the Crossroads and Crown of Stars series

"Wintersong is a maze of beauty and darkness, of music and magic and glittering things, all tied together with exquisite writing. This is a world you will want to stay lost in."—Marie Lu, #1 New York Times bestselling author of Legend and The Young Elites

"Spellbinding and sexy, Wintersong is a feast for all the senses. I didn't want this beautifully written book to end."—Renée Ahdieh, #1 New York Times bestselling author of The Wrath and the Dawn

"This was Labyrinth by way of Angela Carter, and I think my soul has been aching for a book like Wintersong for the last decade. Deliciously romantic, with a nuanced Goblin King and a strong heroine, this story was rife with fairy tales, music, and enchantment."—Roshani Chokshi, New York Times bestselling author of The Star-Touched Queen

"S. Jae-Jones has a great grasp of emotion in her writing, and plucks your heart-strings from the very first pages. This story will make you hurt in the most fantastic way. It is captivating. A very strong debut."—Charlie N. Holmberg, bestselling author of The Paper Magician

"This is an exquisitely and lyrically crafted tale of longing, sibling loyalty, and the importance of women in a time when women were so often overlooked. Eerie, unsettling, and above all, full of music." —Booklist (starred review)

"Jae-Jones writes beautifully about the magic of love, the power of music, and the importance of free will." —Publishers Weekly

"Structured as a sonata, the final movement culminates in a bittersweet sacrifice that will leave readers... savoring the delicious tragedy." —Kirkus Reviews

"[R]ife with intricate details and world-building, as well as the charged relationship between Liesl and the Goblin King. Fans of Gregory Maguire's Egg & Spoon or E.K. Johnston's A Thousand Nights will be drawn to the in-depth depictions of the goblin's realm." —School Library Journal

S. Jae-Jones (called JJ) is an artist, an adrenaline junkie, and erstwhile editrix. When not obsessing over books, she can be found jumping out of perfectly good airplanes, co-hosting the Pub(lishing) Crawl podcast, or playing dress-up. Born and raised in Los Angeles, she now lives in North Carolina, as well as many other places on the internet, including Twitter, Tumblr, Facebook, Instagram, and her blog.
Loading...
or support indie stores by buying on
(This book is on backorder)