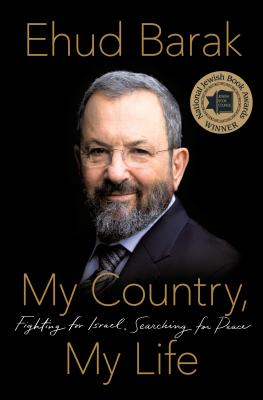 My Country, My Life (Hardcover)

Fighting for Israel, Searching for Peace

The definitive memoir of one of Israel's most influential soldier-statesmen and one-time Prime Minister, Ehud Barak, with insights into forging peace in the Middle East.

In the summer of 2000, the most decorated soldier in Israel's history—Ehud Barak—set himself a challenge as daunting as any he had faced on the battlefield: to secure a final peace with the Palestinians. He would propose two states for two peoples, with a shared capital in Jerusalem. He knew the risks of failure. But he also knew the risks of not trying: letting slip perhaps the last chance for a generation to secure genuine peace.

It was a moment of truth.

It was one of many in a life intertwined, from the start, with that of Israel. Born on a kibbutz, Barak became commander of Israel's elite special forces, then army Chief of Staff, and ultimately, Prime Minister.

My Country, My Life tells the unvarnished story of his—and his country's—first seven decades; of its major successes, but also its setbacks and misjudgments. He offers candid assessments of his fellow Israeli politicians, of the American administrations with which he worked, and of himself. Drawing on his experiences as a military and political leader, he sounds a powerful warning: Israel is at a crossroads, threatened by events beyond its borders and by divisions within. The two-state solution is more urgent than ever, not just for the Palestinians, but for the existential interests of Israel itself. Only by rediscovering the twin pillars on which it was built—military strength and moral purpose—can Israel thrive.

Ehud Barak served as Israel's Prime Minister from 1999 to 2001. He was the leader of the Labor Party from 2007 until 2011, and Minister of Defense, first in Olmert's and then in Netanyahu's government from 2007 to 2013. Before entering politics, he was a key member of the Israeli military, occupying the position of Chief-of-Staff. Barak holds a B.S.c in Physics and Math from the Hebrew University in Jerusalem and an M.Sc. degree from Stanford in Engineering-Economic Systems.

Ehud is the author of My Country, My Life.


Praise For My Country, My Life: Fighting for Israel, Searching for Peace…

"Barak's memoir provides a detailed picture of a man who has lived a full life... For the past two decades, Barak has played a significant role in the Israeli government, and his insights into that country's domestic policies are valuable. A worthwhile addition to all Middle Eastern history collections." —Booklist

"[Barak's] writing is clear and full of colorful anecdotes. This is a significant resource for understanding Israel's recent history." —Publishers Weekly

"My Country, My Life is a rich and engrossing memoir from one of Israel’s premier political leaders, who went from being a decorated soldier to a staunch advocate for peace. Ehud Barak’s love of Israel pours through every page of this book, which makes his warnings about the country’s future as a Jewish and democratic state all the more powerful, urgent, and real." —Madeleine Albright, former U.S. Secretary of State

"The life of Ehud Barak is the story of a warrior who became a statesman. My Country, My Life, an aptly titled memoir, is honest, captivating, and moving." —Dr. Henry Kissinger, former U.S. Secretary of State

"Ehud Barak's My Country, My Life is a powerful, must-read for anyone interested in peace in the Middle East and, indeed, anywhere in the world. As a journalist who has covered the peace process for many years, I thought I was pretty well-informed. But I must say: I learned a great deal by reading this beautifully written and very candid memoir." —Wolf Blitzer, CNN

"A riveting memoir of war and almost-peace by Ehud Barak, one of Israel's wisest modern leaders. Barak describes his missions for Israel's toughest commando unit with the passion of a born soldier. The most poignant passages of this book describe Barak's unsuccessful struggle as prime minister to hammer out a peace deal with the PLO's Yasser Arafat—in what proved to be one of the Middle East's tragic 'near misses.'" —David Ignatius, columnist, The Washington Post