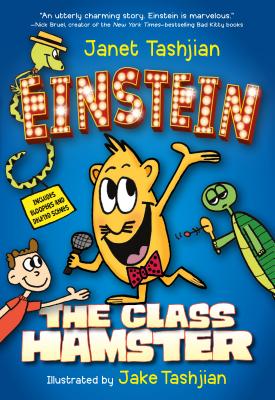 Einstein the class hamster is from a long line of class hamsters. He knows lots of cool facts about science, art, and history—maybe even more than their sleepy teacher, Ms. Moreno. The class has a chance to compete in a trivia game show contest. But how can they get ready for the contest if Ms. Moreno keeps taking naps instead of teaching? More important, how can Einstein help the class prepare for the contest when the only kid who can hear him is Ned?

Janet and Jake Tashjian, the team behind My Life as a Book, team up again in this hilarious illustrated chapter book series starring the lovable walking encyclopedia, game show–obsessed Einstein.

“A clever gigglefest of a series starter.” —Booklist

“The mother-son team behind My Life as a Book and its sequels returns with a funny . . . story for a younger crowd.” —Publishers Weekly