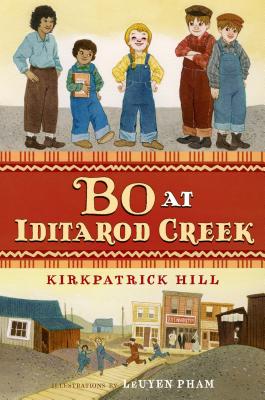 Ever since five-year-old Bo can remember, she and her papas have lived in the little Alaskan mining town of Ballard Creek. Now the family must move upriver to Iditarod Creek for work at a new mine, and Bo is losing the only home she's ever known. Initially homesick, she soon realizes that there is warmth and friendship to be found everywhere . . . and what's more, her new town may hold an unexpected addition to her already unconventional family.

As with Bo at Ballard Creek, this stand-alone sequel from Kirkpatrick Hill is a story about love, inclusion, and day-to-day living in the rugged Alaskan bush of the late 1920s. Full of fascinating details, it is an unforgettable story.


Praise For Bo at Iditarod Creek…

“This sequel to the Scott O'Dell award-winning Bo at Ballard Creek finds Bo, younger brother Graf, and their papas leaving one Alaska mining town for another . . . this episodic novel is filled with local color.” —Booklist, STARRED REVIEW

“This series is a good historical fiction alternative to the "Little House on the Prairie" books, with updated understandings of race, gender, and family.” —School Library Journal

“Illustrated with robust spot art and lightly but effectively plotted, this second book about Bo has all the virtues of the first: humor, good nature, and characters and situations that are colorful without ever becoming picturesque.” —The Horn Book

“The disarmingly forthright tone is set right at the start . . . cheerful. Like Little House in the Big Woods but . . . more rambunctious.” —The Horn Book, starred review on Bo at Ballard Creek

“It's the simple things that thrill, and Hill, born and raised in a gold-mining Alaskan community herself, infuses her text with engaging small details, while Pham's exuberant illustrations add playfulness to the story.” —Booklist on Bo at Ballard Creek

“Bo is an endearing Pollyanna in a parka.” —Kirkus Reviews on Bo at Ballard Creek

Kirkpatrick Hill lives in Fairbanks, Alaska. She was an elementary school teacher for more than thirty years, most of that time in the Alaskan “bush.” She has written several books for young readers, including Toughboy and Sister, Winter Camp, and the award-winning The Year of Miss Agnes.

LEUYEN PHAM worked in animation before turning to children’s books. She wrote and illustrated Big Sister, Little Sister and The Bear Who Wasn't There, and is the illustrator of numerous other picture books. Ms. Pham lives in Los Angeles, California, with her husband.
Loading...
or support indie stores by buying on