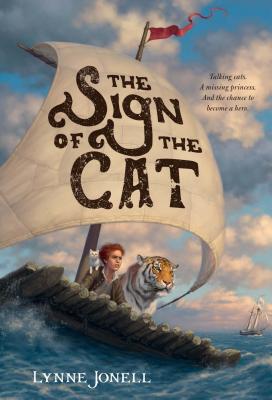 Talking cats, a missing princess, swordfights with villains, and secret identities combine in this epic tale of bravery and self-discovery on the high seas.

Duncan is very smart. He also has a most unusual gift. So why does his mother encourage him to be perfectly average and insist he only get mediocre grades ? His special talent is the ability to talk to cats—but Duncan longs more than anything for academic success. When Duncan rebels and gets a perfect test score, people start taking notice of him. And it turns out that some of those people may not have the best intentions . . . not by a long shot.

From the same author of The Secret of Zoom and Emmy and the Incredible Shrinking Rat, Lynne Jonell delivers another magical and unforgettable adventure in The Sign of the Cat.

“This exciting tale, with just a touch of fantasy and humor, is a winner. . . . Jonell displays pitch-perfect skills in an expertly crafted story that never flags and that includes plenty of heart-stopping situations to keep readers fully engaged.” —School Library Journal, starred review on The Secret of Zoom

“Plenty of quirky imagination, off-kilter energy, and looping thrills.” —Booklist on The Secret of Zoom

“Eccentric and entertaining.” —Kirkus Reviews on The Secret of Zoom

“A droll fantasy with an old-fashioned sweep and a positively cinematic cast.” —Publishers Weekly, starred review on Emmy and the Incredible Shrinking Rat

“A mystery is cleverly woven into this fun and, at times, hilarious caper, and children are likely to find themselves laughing out loud . . . A delightful read.” —School Library Journal, starred review on Emmy and the Incredible Shrinking Rat

Lynne Jonell is the author of the novels Emmy and the Incredible Shrinking Rat, Emmy and the Home for Troubled Girls, and The Secret of Zoom, as well as several critically acclaimed picture books. Her books have been named Junior Library Guild Selections and a Smithsonian Notable Book, among numerous other honors. Born in Little Falls, Minnesota, Jonell grew up in a suburb of Minneapolis. She now teaches writing at the Loft Literary Center and lives with her husband and two sons in Plymouth, Minnesota, in a house on a hill.
Loading...
or
Not Currently Available for Direct Purchase