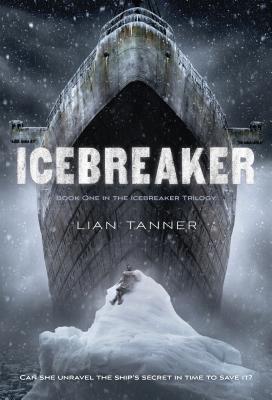 Twelve-year-old Petrel is an outcast, living on an ancient icebreaker that has been following the same ocean course for three hundred years. The ship's crew has forgotten its original purpose and has broken into three warring tribes. Everyone has a tribe except Petrel, whose parents were thrown overboard for alleged crimes. She has survived by living in the dark corners of the ship, and speaking to no one except two large rats, Mister Smoke and Mrs. Slink.

When a boy is discovered on a frozen iceberg, the crew is immediately on alert. Petrel hides him on board, hoping he'll be her friend. What she doesn't know is that the ship guards a secret, held down deep in its belly, and the boy has been sent to seek and destroy it.

Icebreaker by Lian Tanner is a lush fantasy and thrilling adventure story, with an unforgettable friendship at its heart.

“The world of Icebreaker is wonderfully realised: the clanking engines, rusted walkways and icy upper decks of the ship make for vivid settings. There is suspense and danger, and the characterisation is very human and ultimately moving … The first in a new series, Icebreaker should appeal to middle- and upper-primary readers who love adventure, suspense and strange worlds.” —Australian Bookseller and Publisher, four and a half stars, Sept 2013

“This new trilogy will bait readers with its intriguing premise, hook them with its starkly beautiful setting, and reel them in with its fascinating characters. . . . An artfully crafted adventure that's equal parts thought-provoking and thrilling.” —Kirkus Reviews, starred review

“Non-stop action against a magical backdrop; this is a wonderful worldto get lost in.”—Catherine Jinks, author of the Evil Genius trilogy

Lian Tanner is the author of the Keepers trilogy (Museum of Thieves, City of Lies, Path of Beasts), winner of numerous awards around the world, including the Aurealis Award for Children's Fiction. She lives in Australia.
Loading...
or support indie stores by buying on