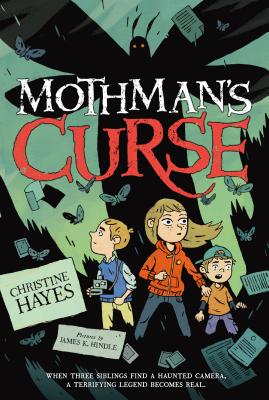 A thrilling tale about when the borders between legend and reality blur--with dangerous consequences.

When Josie and her brothers uncover a haunted camera, the Mothman legend becomes a terrifying reality that threatens their entire town in this spooky and action-filled novel.

Josie may live in the most haunted town in America, but the only strange thing she ever sees is the parade of oddball customers that comes through her family's auction house each week. But when she and her brothers discover a Polaroid camera that prints pictures of the ghost of local recluse John Goodrich, they are drawn into a mystery dating back over a hundred years. A desperate spirit, cursed jewelry, natural disasters, and the horrible specter of Mothman all weave in and out of the puzzle that Josie must solve to break the curse and save her own life.

Mothman's Curse by Christine Hayes is a spine-chilling middle-grade novel full of action and adventure, and contains black and white illustrations from artist, comic writer and designer James K. Hindle.

“Scary enough to appeal to readers who are growing out of R.L. Stine titles, this may also tempt fans of realistic fiction.” —School Library Journal

“An ectoplasmic extravaganza...tailor-made for reading beneath the bedcovers.” —Kirkus Reviews, starred review

“Scary enough to appeal to readers who are growing out of R.L. Stine titles, this may also tempt fans of realistic fiction.” —School Library Journal

Christine Hayes grew up loving stories about the creatures that curl your toes, and the legends that send a shiver down your spine. Now she loves writing about them, too. She lives in Utah with her family, her dog Chewie, and a collection of vintage finds that hopefully are not cursed.

James K. Hindle illustrated Mothman’s Curse by Christine Hayes, and has also done illustrations for The New York Times, The Boston Globe, NYU Press and other publishers. He lives in western Massachusetts with his wife and three sons.
Loading...
or
Not Currently Available for Direct Purchase