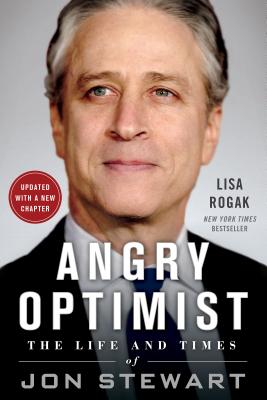 The Life and Times of Jon Stewart

Since his arrival at The Daily Show, Jon Stewart has become one of the major players in comedy as well as one of the most significant liberal voices in the media. In Angry Optimist, Lisa Rogak follows his unlikely rise to stardom, from his early days growing up in New Jersey, through his years as a struggling stand-up comic in New York, and on to the short-lived but acclaimed The Jon Stewart Show, before at last landing a job as host of a half-hour comedy show that at the time was still finding its footing amidst roiling internal drama.

Once there, Stewart transformed The Daily Show into one of the most influential news programs on television today. Drawing on interviews with current and former colleagues and with new material on his departure from The Daily Show, Angry Optimist reveals how Jon Stewart has come to wield incredible power in American politics and changed how the news is reported along the way.


Praise For Angry Optimist: The Life and Times of Jon Stewart…

“Including both humorous and serious insights from colleagues, Rogak presents a detailed picture of the Comedy Central show, revealing exhausting writing schedules, dogs in the office, interns running around at top speed and people who aren't particularly enamored with the host. … An inside look at the man who changed the face of comedy talk shows.” —Shelf Awareness

“Lots of laughs as well as some surprising pieces of information.” —Examiner.com

“Sheds an expansive light on the vertically challenged, humorous young boy from not-so-humble New Jersey beginnings, and the strides and stumbles he weathered on his journey to becoming a multi-faceted man of media.” —Cleveland Plain Dealer

LISA ROGAK is author of The Dogs of War: The Courage, Love, and Loyalty of Military Working Dogs as well as the Edgar- and Anthony-nominated Haunted Heart: The Life and Times of Stephen King and editor of The New York Times-bestselling Barack Obama in His Own Words.
or support indie stores by buying on
(This book is on backorder)