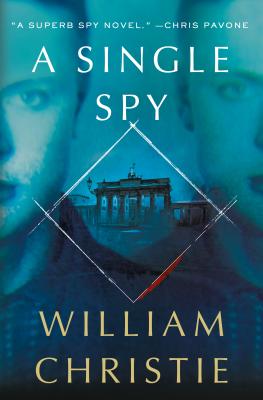 “A single spy—in the right place and at the right moment—may change the course of history.”

Alexsi Ivanovich Smirnov, an orphan and a thief, has been living by his wits and surviving below the ever-watchful eye of the Soviet system until his luck finally runs out. In 1936, at the age of 16, Alexsi is caught by the NKVD and transported to Moscow. There, in the notorious headquarters of the secret police, he is given a choice: be trained and inserted as a spy into Nazi Germany under the identity of his best friend, the long lost nephew of a high ranking Nazi official, or disappear forever in the basement of the Lubyanka. For Alexsi, it’s no choice at all.

Over the course of the next seven years, Alexsi has to live his role, that of the devoted nephew of a high Nazi official, and ultimately works for the legendary German spymaster Wilhelm Canaris as an intelligence agent in the Abwehr. All the while, acting as a double agent—reporting back to the NKVD and avoiding detection by the Gestapo. Trapped between the implacable forces of two of the most notorious dictatorships in history, and truly loyal to no one but himself, Alexsi’s goal remains the same—survival.

In 1943, Alexsi is chosen by the Gestapo to spearhead one of the most desperate operations of the war—to infiltrate the site of the upcoming Tehran conference between Churchill, Roosevelt, and Stalin, and set them up to be assassinated. For Alexsi, it’s the moment of truth; for the rest of the world, the future is at stake.

WILLIAM CHRISTIE is a graduate of the University of Pennsylvania and a former Marine Corps infantry officer who commanded a number of units and served around the world. In addition to A Single Spy, he has written several other novels, published either under his own name or that of F.J. Chase.

Praise For A Single Spy…

"If you enjoy the works of Alan Furst and Terry Hayes, great espionage thrillers with heart and intelligence, then you will love A Single Spy." —Aspen Daily News

“World War II history buffs, listen up: This one’s for you…this is spy fiction of the highest order.” —Bookish

"A superb spy novel, with a vast sweep across the Eastern Front of World War II, all told from the vantage of a single man fighting to survive, while also perhaps changing the course of history." —Chris Pavone, New York Times bestselling author of The Expats

"A rousing adventure saga and a first-rate spy novel. Exciting action scenes. Accurate espionage tradecraft. This irresistible historical thriller grabbed me with its fascinating depiction of little known, major events in WWII. Its unusual main character, a double agent for both the Soviets and the Nazis but looking out only for himself, is a wry deadly charmer." —David Morrell, New York Times bestselling author of Ruler of the Night

"A Single Spy is a brilliant and beautiful novel that places William Christie firmly in the rarefied ranks of the world's finest authors of espionage fiction. Readers who've appreciated the dark, wonderfully written novels of John le Carré and Alan Furst, owe it to themselves to read it. The novel is that rare; Christie is that good." —Dan Simmons, New York Times bestselling author of The Terror and The Crook Factory

"Alexsi is a breath of fresh air, a survivor for the ages who must live by his wits even as he is squeezed by the tyranny of both Stalin and Hitler. William Christie renders him convincingly, in tight, lucid prose with vivid period detail.” —Dan Fesperman, author of The Letter Writer

"Christie paints not only a brilliant portrait of a daring young spy, but also of an explosive era. Taut, expertly plotted, and with an ingenious climax, this is a spy thriller for the ages." —Dan Mayland, author of The Colonel’s Mistake

"To write a World War Two espionage thriller as chilling as A Single Spy, and to capture what it takes to survive bloodthirsty dictators, William Christie is either a brilliant novelist and gifted historian, or he is a 93-year old veteran of the Soviet and the Nazi spy services who has the memory of an elephant and the soul of a wolf." —Justin Scott, New York Times bestselling author of The Shipkiller and Rampage, and co-author of the "Isaac Bell" series with Clive Cussler