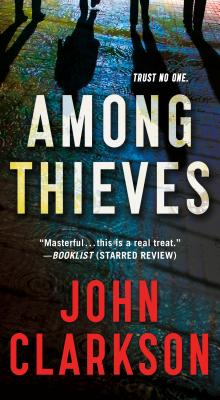 They thought they could cover up what an out-of-control trader at a Manhattan brokerage firm did to Olivia Sanchez. She worked hard, played by the rules, but so what? Blackball her from the industry and be done with her. Who's going to stop them? No one-until now.,,
"Hardboiled urban noir from the pen of a master...highly recommended."
-Lee Child
When Olivia turns to her cousin Manny, an ex-con and ex--gang leader, all bets are off. Manny sets out to take care of the arrogant bastard who hurt his cousin-for good. But his partner, James Beck, part of a tight clique of ex-cons based in Brooklyn's Red Hook, convinces Manny to hold off. Things can be complicated in the world of finance. But even Beck could not have imagined how much is really at stake...
"Fabulous... Clarkson brings some finely-honed cinematic chops to this darkly humorous book." -Bookreporter
Soon Beck and his loyal band are forced into an escalating war against criminals of every stripe-from Wall Street honchos and Russian mobsters to arms dealers and even the NYPD. Now, the only way for Beck to stay out of prison is to outsmart, outfight, never concede, and ultimately rob their enemies of tens of millions of dollars...if he doesn't lose his life first.
"James Beck is not a man to cross...With crisp prose, masterful plotting, and building suspense, this is a real treat."-Booklist (starred review)


Praise For Among Thieves: A Novel…

“[An] outstanding thriller... Fans of Lee Child's Jack Reacher will find a lot to like” —Publishers Weekly (starred review)

“With crisp prose, masterful plotting, and building suspense, this is a real treat for fans of gritty crime fiction, who will want more from Clarkson.” —Booklist (starred review)

“Among Thieves is hardboiled urban noir from the pen of a master … highly recommended.” —Lee Child, New York Times bestselling author of Personal

“Among Thieves is an adrenaline fueled rush of reality and James Beck is one of the baddest, boldest, brashest creations ever seen in the pages of any thriller. It's a rock 'n roll, foot-stomper of a book and once you start you cannot stop reading. You can't ask for more out of a crime novel than you get from Among Thieves. It is as good as good gets.” —Lorenzo Carcaterra, New York Times bestselling author of Sleepers and The Wolf

“Fans of the great Lawrence Block and Lee Child will get their money's worth and then some.” —Peter Blauner, author of Slow Motion Riot and Executive Producer of Law and Order: Special Victims Unit

“John Clarkson's Among Thieves is an intense, well-written thriller about tough, cunning men whose conflicting schemes turn Brooklyn into a battlefield.” —Thomas Perry, author of Butcher's Boy and Vanishing Act

JOHN CLARKSON is the author of several thrillers and crime novels published in the late 90's, and the early 00's. During the day, he ran a boutique advertising firm, then a private marketing and advertising consulting firm. He has worked directly with corporate clients such as NewPower, Chase Manhattan and E*Trade Financial where he helped create the notorious E*Trade Baby. Like James Beck, he lives in Brooklyn, New York. He is the author of Bronx Requiem, among other books.
or
Not Currently Available for Direct Purchase