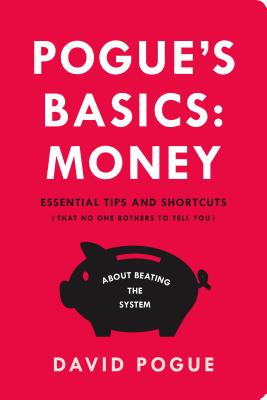 Money: Essential Tips and Shortcuts (That No One Bothers to Tell You) About Beating the System

Want to know where you can buy $100 iTunes gift cards for $85?
Did you know you can pay your taxes by using a cash-back credit card?
Why are you still paying $235 a year to rent your cable box?

DAVID POGUE has 1.5 million followers on Twitter and recently launched a consumer-tech site for Yahoo. Previously he was the tech columnist at The New York Times for thirteen years where he wrote weekly columns that constantly ended up on the Top Ten List of most e-mailed articles of the paper. Additionally Pogue writes a monthly column for Scientific American, is the creator of the Missing Manual computer-book series, and hosts science shows on PBS's NOVA. He has been a correspondent for CBS Sunday Morning since 2002, for which he has won two Emmys, as well as two Webbys, and a Loeb award for journalism.

Praise For Pogue's Basics: Money: Essential Tips and Shortcuts (That No One Bothers to Tell You) About Beating the System…

"David Pogue is back with the third installment in his bestselling series. This time, Pogue fills the pages with lesser known tips on how to save and make money.... Whatever it is, Pogue has the inside scoop on how to get it done." —Atlanta Journal-Constitution
or support indie stores by buying on
Copyright © 2020 American Booksellers Association