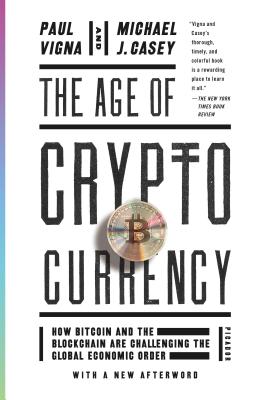 The Age of Cryptocurrency

How Bitcoin and the Blockchain Are Challenging the Global Economic Order

Bitcoin became a buzzword overnight. A cyber-enigma with an enthusiastic following, it pops up in headlines and fuels endless media debate. You can apparently use it to buy anything from coffee to cars, yet few people seem to truly understand what it is. This raises the question: Why should anyone care about bitcoin?

In The Age of Cryptocurrency, Wall Street journalists Paul Vigna and Michael J. Casey deliver the definitive answer to this question. Cybermoney is poised to launch a revolution, one that could reinvent traditional financial and social structures while bringing the world's billions of "unbanked" individuals into a new global economy. Cryptocurrency holds the promise of a financial system without a middleman, one owned by the people who use it and one safeguarded from the devastation of a 2008-type crash.

But bitcoin, the most famous of the cybermonies, carries a reputation for instability, wild fluctuation, and illicit business; some fear it has the power to eliminate jobs and to upend the concept of a nation-state. It implies, above all, monumental and wide-reaching change—for better and for worse. But it is here to stay, and you ignore it at your peril.

Vigna and Casey demystify cryptocurrency—its origins, its function, and what you need to know to navigate a cyber-economy. The digital currency world will look very different from the paper currency world; The Age of Cryptocurrency will teach you how to be ready.


Praise For The Age of Cryptocurrency: How Bitcoin and the Blockchain Are Challenging the Global Economic Order…

“Vigna and Casey's thorough, timely and colorful book is a rewarding place to learn it all.” —The New York Times Book Review

“For any book on bitcoin to be worth reading, it has to delve further: into the crypto-currency's ideological and technical roots, for instance, or what it adds to the narrative of money, or even what its economic and political impact may be. The currency's...underlying technology provides plenty of intellectual fodder-and is unlikely to go away. So there is plenty to write about if you are serious. Paul Vigna and Michael Casey, two journalists at the Wall Street Journal, are certainly serious.” —The Economist

“[Vigna and Casey] have produced more than a bitcoin 101: their [book] is a smarter, more holistic take on not just bitcoin, but the potential of all digital currencies to change the way we send each other money.” —Fortune

“This book by @mikejcasey and @paulvigna is a new must-read on Bitcoin and cryptocurrency!” —Marc Andreessen (@pmarca)

“To their ample credit, Paul Vigna and Michael J. Casey, veteran Wall Street Journal reporters, resist the common temptations to hype their trendy subject. They've written a reported explainer that patiently documents bitcoin's rise, acknowledges its flaws and highlights its promise. Smart and conscientious, The Age of Cryptocurrency is the most thorough and readable account of the short life of this controversial currency.” —The Washington Post

“This book should be required reading for anyone who has an interest in digital currency or the capabilities of the blockchain.” —Bitcoin Magazine

“If you are baffled by Bitcoin and bemused by blockchains then The Age of Cryptocurrency... includes everything you could possibly want to know about cryptocurrencies, without the need for being either a skilled mathematician or uber-geek computer engineer.” —Global Finance Magazine

“Thorough, multidisciplinary approach to the topic, including a fascinating examination of the origin of money... newcomers will gain a better understanding of the revolutionary potential of digital currency...And the explication of the non-currency applications of the concepts behind Bitcoin--such as tamper-proof records of verified information will be valuable to any reader.” —Publishers Weekly, starred review

“Anyone who doubts that bitcoin and its imitators are at the early stage of altering fundamentally the global payments system--if not the nature of money itself--will find it difficult to resist Michael Casey and Paul Vigna's admirably clear and judicious account. If the word 'blockchain' makes you want to call a plumber, or if you think Satoshi is some kind of raw fish, you need to read The Age of Cryptocurrency today. If you're already a bit-convert, you'll still learn a lot.” —Niall Ferguson, author of The Ascent of Money

“Anyone who views bitcoin as a voodoo concept must read this totally comprehensible narrative outlining the history of money and how bitcoin might become a new and better currency. For those confused by bitcoin concepts, this clearheaded and readable book sets forth credible reasons why bitcoin might or might not be an evolving economic miracle.” —Arthur Levitt, 25th Chairman of the United States Securities and Exchange Commission

“An invaluable book: a fascinating field guide to the phenomenon in which three of the most powerful forces shaping our world today--the reform of finance, technological innovation, and the rejection of traditional politics--meet.” —Felix Martin, author of Money: The Unauthorized Biography

“The Age of Cryptocurrency not only demystifies and explains bitcoin, but also shows where it fits into the cultural zeitgeist and where it's pointed, and what that may mean for our financial system.” —John Mauldin, New York Times bestselling author of Endgame

“The thought-provoking Age of Cryptocurrency was a pleasure to read. The authors have successfully demystified cryptocurrencies like bitcoin so that even a traditionalist like myself can understand them and embrace their potential. And the references to money were so spot-on, they even taught this old dog some new tricks.” —Edmund C. Moy, 38th Director of the United States Mint, 2006-2011

“Vigna and Casey unlock the mysteries of cryptocurrencies and their implications for the future of financial transactions in an engaging, lucid, and thought-provoking account. The technological developments described in this book will someday affect every one of us and I can think of no better guide to what the future holds.” —Eswar Prasad, author of The Dollar Trap

“Even to a bitcoin skeptic like myself, Vigna and Casey's book is a fascinating journey into the cast of characters and oddballs behind the movement into the digital currency realm.” —Barry Ritholtz, CIO, Ritholtz Wealth Management

“Vigna and Casey are cautious, though enthusiastic guides to this strange new world. Being Wall Street Journal reporters, they know how to dig beneath the surface and they also know how to write. The book is full of fascinating stories, from the origins of money to the future of decentralised commerce, from the Mt Gox meltdown to the Silk Road bust.” —Matt Ridley, Times of London

“[I]n...their fascinating book on the topic, Wall Street Journal columnists Paul Vigna and Michael Casey set out to convince readers that bitcoin is not only going straight, but has the potential to change the world.” —Literary Review

“[T]he book is extremely well written, and easy to understand. In a nutshell, it narrates the chronology of Bitcoin's evolution with impeccable precision. It is free of hype, while not being shy in pinning the important role that cryptocurrencies will play in our future.” —William Mougayar, Venture Advisor

“Bitcoin and Bitchain (sic) are likely to revolutionize money...The book to read on this topic is The Age of Cryptocurrency by Vigna and Casey two Wall Street Journal financial journalists.” —Rishad Tobbacowala

“This sober yet exciting account of cryptocurrency, told by two very smart and objective reporters, is exactly the way to introduce yourself, or a sophisticated newbie you know, to the technology's revolutionary potential. I recommend you check it out.” —Jerry Brito, Executive Director, Coin Center

Paul Vigna is a markets reporter for The Wall Street Journal, covering equities and the economy. He is a columnist and anchor for MoneyBeat. Previously a writer and editor of the MarketTalk column in DowJones Newswires, he has been a guest on the Fox Business Network, CNN, the BBC, and the John Batchelor radio show. He has been interviewed by Bitcoin magazine and appeared on the Bitcoins & Gravy podcast, and boasts a collective 20 years of journalism experience. Vigna has coauthored books with Michael J. Casey, including The Age of Cryptocurrency and The Truth Machine.

MICHAEL J. CASEY writes for The Wall Street Journal, covering global finance in his "Horizons" column. He is a frequent contributor to the Journal's MoneyBeat blog and co-authors the daily "BitBeat" with Paul Vigna. He is the host of the book-themed video series "WSJ Afterword" and a frequent guest on and host of "The News Hub" and "MoneyBeat." Casey has written for such publications as Foreign Policy, The Washington Post, and The Financial Times. He is the author of Che's Afterlife: The Legacy of an Image (Vintage, 2009), one of Michiko Kakutani's "best books of 2009," and The Unfair Trade: How Our Broken Financial System Destroys the Middle Class (Crown, 2012).
Loading...
or support indie stores by buying on