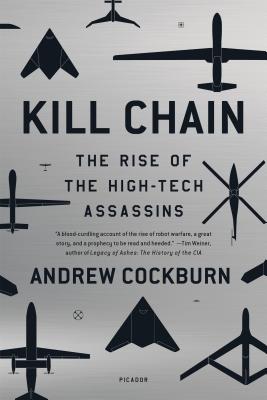 The Rise of the High-Tech Assassins

An essential and page-turning narrative on the history of drone warfare by the acclaimed author of Rumsfeld, exploring how this practice emerged, who made it happen, and the real consequences of targeted killing

Assassination by drone is a subject of deep and enduring fascination. Yet few understand how and why this has become our principal way of waging war. Kill Chain uncovers the real and extraordinary story; its origins in long-buried secret programs, the breakthroughs that made UAV operations possible, the ways in which the technology works and, despite official claims, does not work. Taking the reader inside the well-guarded world of national security, the book reveals the powerful interests - military, CIA and corporate - that have led the drive to kill individuals by remote control. Most importantly of all, the book describes what has really happened when the theories underpinning the strategy -- and the multi-billion dollar contracts they spawn -- have been put to the test. Drawing on sources deep in the military and intelligence establishments, Andrew Cockburn's Kill Chain unveils the true effects, as demonstrated by bloody experience, of assassination warfare, a revelation that readers will find surprising as well as shocking.

Andrew Cockburn is the Washington Editor of Harper's magazine and the author of many articles and books on national security, including the New York Times Editor's Choice Rumsfeld and The Threat, which destroyed the myth of Soviet military superiority underpinning the Cold War. He is a regular opinion contributor to the Los Angeles Times and has written for, among others, the New York Times, National Geographic and the London Review of Books.

Praise For Kill Chain: The Rise of the High-Tech Assassins…

"Kill Chain is a fascinating book ... a revelatory, must-read account of drones and killing from the air."-Joel Whitney, San Francisco Chronicle

"Cockburn is a crackerjack writer...He draws a high-resolution picture of vested interests (kickbacks, egos, along with Raytheon, Lockheed, Northrop, Hughes, General Dynamics, Booz Allen, and company), leading us down the garden path to the seventy-two virgins. The tools don't work - on many levels, drones cut 'a wide and indiscriminate swath through local society' - and the military's strategy is a failure."-Peter Lewis, The Christian Science Monitor

"Cockburn pulls back the camera to provide a wider historical perspective, setting the policy of targeted killing via drones within the larger context of the American military-industrial complex. From the repeated failure of the stealth bombing campaigns in the Kosovo and Vietnam wars, to the way in which the drug wars stepped in to perpetuate the security bureaucracy of the Cold War, Cockburn sees America's killer drone policy as the culmination of a historical pattern of lies, deception, and greed in the deployment of lethal military force around the world... [InKill Chain] Cockburn, the righteous political leftists, [carries] the torch of the antiwar crusade into current debates."-Karen J. Greenberg, The Washington Post

“This brilliant book tells us how computers kill soldiers and civilians, and explains with bone-chilling clarity how generalship gave way to microchips from Vietnam to Afghanistan. A blood-curdling account of the rise of robot warfare, a great story, and a prophecy to be read and heeded.” —Tim Weiner, author of Legacy of Ashes: The History of the CIA

“A compellingly readable book that not only tells us why drones cannot live up to the overblown expectation of politicians but lucidly explains the vulnerability of intelligence, either robotic or human, better than any book I have ever read.” —Edward Jay Epstein, author of Deception: The Invisible War Between the KGB and the CIA

“In this riveting book, Cockburn puts the reader in the pilot's seat as kill teams go on their deadly hunts before dashing home for their children's soccer games. Wrapped in enormous secrecy, the only way past the armed guards and cipher-locks and into this new world of Hellfire diplomacy is Cockburn's great new read. Rather than voter IDs, people should prove they have read this book before being allowed to vote in the next election.” —James Bamford, author of The Shadow Factory: The Ultra-Secret NSA from 9/11 to the Eavesdropping on America

“It's not just the technology that makes a difference on the modern battlefield. It is, by Harper's Washington editor Cockburn's account, the development of a doctrine that augments--and sometimes replaces--the old order of battle with the notion that enemy leaders are objects fit for assassination, adding a necessarily political dimension to the military one…Sharp-eyed and disturbing, especially Cockburn's concluding assessment that, nourished by an unending flow of money, ‘the assassination machine is here to stay.'” —Kirkus

“A report that is both enlivening and terribly troubling.” —Booklist