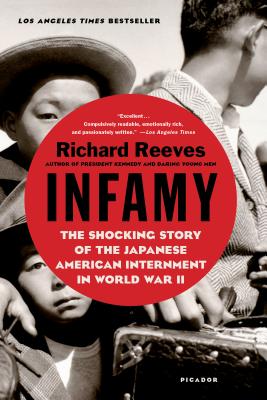 “Highly readable . . . [A] vivid and instructive reminder of what war and fear can do to civilized people.” —Evan Thomas, The New York Times Book Review

After Japan bombed Pearl Harbor, President Roosevelt signed an executive order that forced more than 120,000 Japanese Americans into primitive camps for the rest of war. Their only crime: looking like the enemy.

In Infamy, acclaimed historian Richard Reeves delivers a sweeping narrative of this atrocity. Men we usually consider heroes—FDR, Earl Warren, Edward R. Murrow—were in this case villains. We also learn of internees who joined the military to fight for the country that had imprisoned their families, even as others fought for their rights all the way to the Supreme Court. The heart of the book, however, tells the poignant stories of those who endured years in “war relocation camps,” many of whom suffered this injustice with remarkable grace.

Racism and war hysteria led to one of the darkest episodes in American history. But by recovering the past, Infamy has given voice to those who ultimately helped the nation better understand the true meaning of patriotism.


Praise For Infamy: The Shocking Story of the Japanese American Internment in World War II…

“A compulsively readable, emotionally rich and passionately written account of the internment of 120,000 American Japanese in concentration camps during World War II.... Reeves' excellent Infamy, the first popular, general history of the subject in more than 25 years, reminds us that not only can it happen here, it did.... Every reader who has lived the post-9/11 era will immediately notice the parallels.”—Los Angeles Times

“Highly readable.... The story of this national disgrace, long buried...still has the power to shock. [Infamy is a] vivid and instructive reminder of what war and fear can do to civilized people.” —Evan Thomas, The New York Times Book Review

“History's judgment is that internment...was wrong. Mr. Reeves's excellent book gives us an opportunity to learn from past mistakes.... Reeves is especially good at bringing to life the social experience of internment.” —The Wall Street Journal

“Richard Reeves's book on the harsh, prolonged and unjustified internment of Japanese-Americans during World War II is a detailed account of a painful and shameful period in modern American history. Infamy combines Reeves's journalist's training with his historian's eye to give us a page-turner on how hysteria at the highest levels can shatter our most fundamental rights. Brace yourself and read this very important book.” —Tom Brokaw, author of The Greatest Generation

“For years, the unjust relocation and incarceration of more than 120,000 Japanese Americans living on the West Coast during World War II - the majority of them American citizens - was shrouded in shame and secrecy.... [Infamy's] greatest strength is probably Reeves's masterful use of anecdotes, which enliven an epic story with poignant tales of individual hardship, courage, and endurance.” —The Boston Globe

“Infamy tells the story of why and how the American government--with the full support of its citizenry--illegally interned Japanese-Americans. Richard Reeves even-handedly examines this dangerous precedent-setting time when the Constitution was trampled by misinformation, prejudice, and fear. Today as Muslim and Hispanic immigrants are being blamed for America's ills, Infamy is a timely and important read.” —James Bradley, author of Flags of Our Fathers and The China Mirage

“In Infamy, journalist Richard Reeves...provides a sweeping and searching account of this appalling chapter in the history of the United States.... Reeves reserves the heart of his book -- and rightfully so -- for a narrative of the heartbreaking experiences of evacuated individuals and families.” —San Francisco Chronicle

“Infamy...is perhaps the most thorough history of the relocation to date.” —The Denver Post

“More than 120,000 Japanese-Americans were locked up during World War II...[and Infamy] tells their tale with energy, compassion and moral outrage.... With meticulous care [Reeves documents] the decisions made in Washington by the world's most powerful men, and how those decisions affected the lives of ordinary Americans whose only crime was to be of Japanese descent.” —Minneapolis Star Tribune

“The forced relocation and internment of [Japanese Americans during WWII] was a racially based insult to our purported ideals. Reeves, an award-winning journalist, recounts the unfolding of this outrage with a justifiable sense of moral indignation…. This is a painful but necessary and timely reminder of how overblown fears about national security can have shameful consequences.” —Booklist (starred review)

“Reeves provides unsparing criticism about the racist whirlwind of anti-Japanese feeling fanned by the Roosevelt White House, Congress, state and local governments, and leading media figures ... The testimonies of the uprooted Japanese-Americans, many of whom remained patriotic even as they were forced into the camps, are heartbreaking, courageous, and ironic in light of those who fought valiantly alongside American soldiers while their relatives remained locked away. Reeves's chilling exposé takes a deeper look at one of America's darkest chapters.” —Publishers Weekly

“An engaging and comprehensive depiction of an essential, but sometimes overlooked, era of U.S. history… Reeves unearths and makes public a painful national memory, but he does so while maintaining the dignity of those held behind barbed wire and unmasking the callous racism and disregard of the people who put them there.” —Kirkus Reviews

“Essential... Reeves mixes intimate narratives with historical documents to give an authoritative account of one of the darkest periods in American history.” —Library Journal

Richard Reeves (1936-2020), the bestselling author of such books as President Kennedy: Profile in Power, was an award-winning journalist who worked for The New York Times, wrote for The New Yorker, and served as chief correspondent for Frontline on PBS. He was also a senior lecturer at the Annenberg School for Communication and Journalism at the University of Southern California.
Loading...
or
Not Currently Available for Direct Purchase