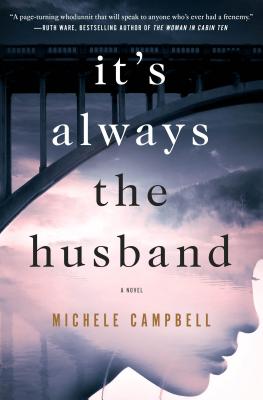 It's Always the Husband

"If you loved Liane Moriarty’s Big Little Lies, put this thriller on the top of your list…you won’t be sure “whodunit” until the very (shocking) end.”
—Today

Kate, Aubrey, and Jenny first met as college roommates and soon became inseparable, despite being as different as three women can be. Kate was beautiful, wild, wealthy, and damaged. Aubrey, on financial aid, came from a broken home, and wanted more than anything to distance herself from her past. And Jenny was a striver—brilliant, ambitious, and determined to succeed. As an unlikely friendship formed, the three of them swore they would always be there for each other.

But twenty years later, one of them is standing at the edge of a bridge, and someone is urging her to jump.

How did it come to this?
Kate married the gorgeous party boy, Aubrey married up, and Jenny married the boy next door. But how can these three women love and hate each other? Can feelings this strong lead to murder? When one of them dies under mysterious circumstances, will everyone assume, as is often the case, that it’s always the husband?

A suspenseful, absorbing novel that examines the complexities of friendship, It’s Always the Husband will keep readers guessing right up to its shocking conclusion.


Praise For It's Always the Husband: A Novel…

Praise for It’s Always the Husband

“Readers will be left in an adrenaline inducing ‘whodunit’ game, until the completely unpredictable conclusion. This book is perfect for fans of Liane Moriarty’s Big Little Lies.” —Redbook Magazine (naming It's Always the Husband one of its “20 Must-Read Books for Spring”)

“Twists, turns, and a puzzling mix of suspects . . . will keep readers turning the pages.” —Booklist

“Campbell’s debut novel is an intriguing whodunit that examines the explosive potential of secrets to destroy friendships, marriages, and lives . . . a page-turner.” —Kirkus Reviews

“Secrets and scandals in an ivy league setting. What could be more riveting? Michele Campbell’s novel is a page-turning Peyton Place.” —Tess Gerritsen

“A brilliant, twisting read that kept me guessing until the final page. A roller coaster friendship among three college roommates ends in murder years later–unless the husband did it. I read my eyes out!” —Janet Evanovich

“A gripping, tangled web of a novel—it pulls you in and doesn’t let you go. I loved it! –Shari LaPena

"A skillful and addictive story of friendship, betrayal and ultimately love, It’s Always the Husband will keep you turning the pages until its dramatic end." –B.A. Paris

"A compelling and twisting story of friendship, buried secrets, and revenge, It’s Always the Husband gets deep beneath the surface of the ties that bind. Intricately plotted and driven by an undeniable momentum, Michele Campbell’s riveting story grabs on, holds tight, and haunts even after the book is closed. Don’t miss it!” – Lisa Unger

Michele is the author of She Was the Quiet One and It's Always the Husband.