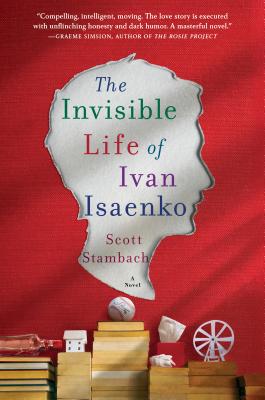 The Invisible Life of Ivan Isaenko

“Seventeen-year-old Ivan Isaenko has spent his entire life in a cloistered world, but he possesses a keen intellect and an understanding of humanity that far exceeds the confines of the Mazyr Hospital for Gravely Ill Children in Belarus. Severely physically handicapped due to radiation poisoning, Ivan has never had a friend beyond his caregivers at the hospital -- until Polina is admitted. The two teens form a fast and indelible bond that will leave readers in awe of the tenacity of their commitment. Heartbreaking and awe-inspiring.”
— Pamela Klinger-Horn (E), Excelsior Bay Books, Excelsior, MN
View the List

Seventeen-year-old Ivan Isaenko is a life-long resident of the Mazyr Hospital for Gravely Ill Children in Belarus. For the most part, every day is exactly the same for Ivan, which is why he turns everything into a game, manipulating people and events around him for his own amusement.

She steals his books. She challenges his routine. The nurses like her.

She is exquisite. Soon, he cannot help being drawn to her and the two forge a romance that is tenuous and beautiful and everything they never dared dream of. Before, he survived by being utterly detached from things and people. Now, Ivan wants something more: Ivan wants Polina to live.


Praise For The Invisible Life of Ivan Isaenko: A Novel…

Praise for The Invisible Life of Ivan Isaenko:

Winner of the Alex Award

“Compelling, intelligent and moving. The love story is executed with unflinching honesty and dark humor. A masterful novel. ” —Graeme Simsion, author of The Rosie Project

"The Invisible Life of Ivan Isaenko is comic and staggeringly tragic, often both in a single sentence… Ivan Isaenko is one of the most surprising narrators I have encountered—witty, adolescent, well-read, at times quite vulgar, and confined to a life that seems nearly unlivable, until he discovers that even at Mazyr Hospital, love is possible. A grittier, Eastern European, more grown-up The Fault in Our Stars." —Eowyn Ivey, author of The Snow Child

"An extraordinarily brave and original debut. Ivan is an unforgettable narrator, and his story ripples with intelligence, humor, heartbreak, and humanity." –Carolina De Robertis, author of The Gods of Tango

“Only a writer with considerable heart and imagination could transform a hospital for post-Chernobyl fallout kids into a captivating, complex, nearly magical world. Scott Stambach has done exactly that. And in the character of Ivan Isaenko he has created an irresistible narrator, just what one would hope for in a seventeen-year-old raised on Nabokov and Dostoyevsky: by equal measures self-aware, hilarious, quick-witted, and profane. He is an original in every sense of the word, and his story is a marvelous one.” —Sarah Shun-lien Bynum, National Book Award Finalist and author of Madeleine Is Sleeping

“It would be an easy injustice to spackle Ivan Isaenko with a bunch of clichéd praise: hilarious, poignant, heart-warming, heart-wrenching. While these are true, Ivan is so much more. It’s an enchantingly acerbic and endearingly charming story about love, hope and humanity in the face of death; truly a tender and thoughtful reflection on our universal malady.” —Bradley Somer, author of Fishbowl

“Ivan Isaenko is a beautiful, heartbreaking, and hilarious novel whose closest literary relative might be One Flew Over the Cuckoo's Nest...A highbrow literary comic book of a novel that will appeal to any reader with a beating heart - a true gem.” –Nickolas Butler, author of Shotgun Lovesongs

SCOTT STAMBACH lives in San Diego where he teaches physics and astronomy at Grossmont and Mesa colleges. He also collaborates with Science for Monks, a group of educators and monastics working to establish science programs in Tibetan Monasteries throughout India. He has written about his experiences working with monks of Sera Jey monastery and has published short fiction in several literary journals including Ecclectica, Stirring, and Convergence.
Loading...
or
Not Currently Available for Direct Purchase