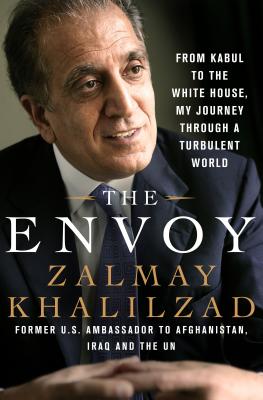 From Kabul to the White House, My Journey Through a Turbulent World

Zalmay Khalilzad grew up in a traditional family in the ancient city of Mazar-i-Sharif, Afghanistan. As a teenager, Khalilzad spent a year as an exchange student in California, where after some initial culture shocks he began to see the merits of America's very different way of life. He believed the ideals that make American culture work, like personal initiative, community action, and respect for women, could make a transformative difference to his home country, the Muslim world and beyond. Of course, 17-year-old Khalilzad never imagined that he would one day be in a position to advance such ideas.

With 9/11, he found himself uniquely placed to try to shape mutually beneficial relationships between his two worlds. As U.S. Ambassador to Afghanistan and Iraq, he helped craft two constitutions and forge governing coalitions. As U.S. Ambassador to the UN, he used his unique personal diplomacy to advance U.S. interests and values. In The Envoy, Khalilzad details his experiences under three presidential administrations with candid behind-the-scenes insights. He argues that America needs an intelligent, effective foreign policy informed by long-term thinking and supported by bipartisan commitment.

Part memoir, part record of a political insider, and part incisive analysis of the current Middle East, The Envoy arrives in time for foreign policy discussions leading up to the 2016 election.

ZALMAY KHALILZAD is a counselor at the Center for Strategic and International Studies and president of Khalilzad Associates. Previously, he worked in the administrations of Ronald Reagan, George H.W. Bush, and George W. Bush and served as the U.S. ambassador to Afghanistan and Iraq and U.S. permanent representative to the United Nations.

Praise For The Envoy: From Kabul to the White House, My Journey Through a Turbulent World…

**One of Parag Khanna's Ten Great Global Reads for Summer 2016**

"There have been a number of memoirs by Bush administration officials, but Mr. Khalilzad’s is far and away the most reflective, honest and compelling." —The Washington Times

"For anyone desiring a detailed chronicle of America’s nation-building efforts after the invasions of Afghanistan and Iraq, Mr. Khalilzad’s book should be required reading." —Wall Street Journal

"One of the most intriguing individuals to play a leading role in the Bush-era wars is Zalmay Khalilzad, a polished diplomat who was the most senior Muslim in the White House at the time of the 9/11 attacks." —The Financial Times

"A chronological, straightforward, occasionally disturbing history of the challenges leading to the current morass." —Kirkus Reviews

“It was fascinating to watch Zal operate in Afghanistan: he knew the country better than any of the foreigners who were in the city and he cared for it as much as any Afghan did. He knew Iraq better than almost all the American officials who were responsible for the decisions whose consequences led to the present situation in the country and the region. Khalilzad's book tells his story with an honest detachment which is refreshingly different from the self-serving, biased accounts we have been used to getting." —Lakhdar Brahimi

"The Envoy is the story of the remarkable life journey of one of our nation's great diplomats. Riveting in its telling, inspiring in its stories, and insightful in its commentary, The Envoy is a book that should find its way onto the bookshelf of anyone who cherishes the American dream and cares about what is happening in our world today." Michael Morell, former Acting and Deputy Director of the CIA and author of the bestselling book about terrorism, The Great War of Our Time

"Zal Khalilzad was the premier American diplomate of the last decade, serving as the top U.S. envoy to Afghanistan, Iraq and the United Nations. He made and has now written an important contribution to our post 9/11 history. Zal's is also a uniquely American story, of someone born in a distant land and raised in a different culture who embraced and then represented with distinction his adopted land." —James Dobbins

“Zalmay Khalilzad is a special talent and colleague who not only thinks strategically, but deftly implements policies on the ground in the most challenging of circumstances. His finger-tip feel for the politics, culture, and personalities of the Middle East, combined with his understanding of the measured use of America’s capabilities, has made him one of the most effective diplomats in recent times. Zal has written a memoir that recounts events he saw firsthand with important insights for today's challenges.” —Donald H. Rumsfeld

"A remarkably candid account by a man who was at the eye of the storm of U.S. foreign policy over the first decade of the 21st century. Ambassador Zal Khalilzad understands as few others do the complex interplay between politics and policy in Washington, and what it takes to implement those decisions in some of the toughest environments around the world." —Lt. General David Barno (ret.), former head of Combined Forces Command-Afghanistan

“I'm so pleased that Zal has finally written this long overdue book. I'm not given to cultural arguments, but there was something about Zal's effectiveness in the Middle East that seemed attributable to his comfort with the ways of the region -- and better yet, the region's comfort level with him. His perspective is invaluable.” —Condoleezza Rice

“Zalmay Khalilzad and I were both born abroad, became American, and worked as academics and practitioners of U.S. foreign policy. He has always operated with a positive vision about what America represents in the world. Zal offers compelling insights into what it means to be of two places, and he has a fascinating and gritty story to share of the making of U.S. policy in one of the most complicated and challenging regions of the world.” —Madeleine Albright