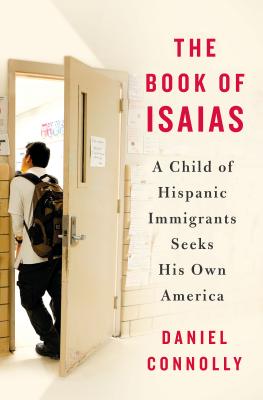 The Book of Isaias

A Child of Hispanic Immigrants Seeks His Own America

18-year-old high school senior Isaias Ramos plays in a punk rock group called Los Psychosis and likes to sing along to songs by Björk and her old band, the Sugarcubes. He’s so bright that when his school’s quiz bowl goes on local TV, he acts as captain.

The counselors at school want him to apply to Harvard. But Isaias isn’t so sure. He's thinking about going to work painting houses with his parents, who crossed the Arizona desert illegally from Mexico.

Despite the obstacles and his own doubts, Isaias sets out on the journey to become the first in his family to go to college. He faces make-or-break standardized testing, immigration bureaucracy and absurdly high college costs. And most importantly, the siren song of doubt.

This simple story reflects broader truths. Mexican immigration has brought the proportion of Hispanics in the nation’s youth population to roughly one in four. Every day, children of immigrants make decisions about their lives that will shape our society and economy for generations.

In the tradition of Friday Night Lights and A Hope in the Unseen, this deeply human narrative offers a powerful antidote to the heated political rhetoric about immigrants and their children.


Praise For The Book of Isaias: A Child of Hispanic Immigrants Seeks His Own America…

"A great book to teach about Dreamers." —Oregon Education Association

"There is a wide, almost universal air to the author's writing, as he alternately tells a narrowly focused story and a broad-based one, making clear that this tale of one family's immigration cannot be told without laying bare the complex context in which it is situated. A story of one child of (unauthorized) immigrants that has much wider, timely resonance." —Kirkus

"Caught up in today's news images, readers will appreciate the intense daily drama behind the offensive 'illegal alien' stereotypes." —Booklist

"Compelling...Connolly's touching story about the challenges that children of immigrants, both documented and undocumented, face in making their way in the United States provides readers with a deeper understanding of the immigration debate." —Library Journal

"Richly reported, empathetic, carefully observed, and devoid of tendentious argument or political spin, The Book of Isaias is a stout rebuke to anyone who wishes to build a wall—real or metaphorical—around this unimaginably complicated and delicately human issue at the center of our national discourse." —Hampton Sides, bestselling author of Americana, In the Kingdom of Ice, and Hellhound on His Trail

"The Book of Isaias is a compassionate and well-told tale from Tennessee, a corner of the U.S. that is being remade, quietly, by the dreams and the labor of Latino immigrants." —Héctor Tobar, author of the New York Times bestselling Deep Down Dark.

"Thought-provoking and moving." —Miriam Pawel, author of The Crusades of Cesar Chavez: A Biography, a National Book Critics Circle finalist

"Isaias' triumphs and his heartbreaking challenges say more about the immigration debate than a thousand sound bites. A must-read for any thoughtful American." —Amanda Eyre Ward, author of The Same Sky

"The story in this book is a crucial one." —Sam Quinones, journalist and author on Mexico and the Mexican-American experience, winner of the National Book Critics Circle Award for Dreamland: The True Tale of America's Opiate Epidemic

"One person's story that makes us realize the universality of the immigrant experience." —Ian Johnson, winner of the Pulitzer Prize for international reporting

"Compelling...[Connolly] is a brilliant and empathetic writer." —The Memphis Flyer

DANIEL CONNOLLY speaks fluent Spanish, and, for more than a decade, has reported on Mexican immigration to the U.S. South for news organizations including The Associated Press in Little Rock, and The (Memphis) Commercial Appeal. The winner of numerous journalism prizes, he has received grants and fellowships from the Pulitzer Center on Crisis Reporting, the International Center for Journalists and the Fulbright program. He lives in his hometown of Memphis, TN.
Loading...
or
Not Currently Available for Direct Purchase