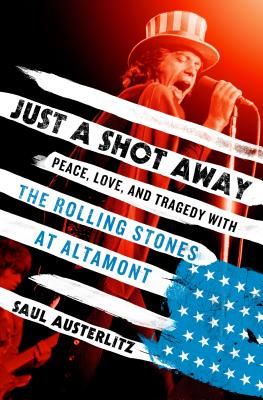 Just a Shot Away

Peace, Love, and Tragedy with the Rolling Stones at Altamont

A thrilling account of the Altamont Festival—and the dark side of the ‘60s.

If Woodstock tied the ideals of the '60s together, Altamont unraveled them.

In Just a Shot Away, writer and critic Saul Austerlitz tells the story of “Woodstock West,” where the Rolling Stones hoped to end their 1969 American tour triumphantly with the help of the Grateful Dead, the Jefferson Airplane, and 300,000 fans. Instead the concert featured a harrowing series of disasters, starting with the concert’s haphazard planning. The bad acid kicked in early. The Hells Angels, hired to handle security, began to prey on the concertgoers. And not long after the Rolling Stones went on, an 18-year-old African-American named Meredith Hunter was stabbed by the Angels in front of the stage.

The show, and the Woodstock high, were over.

Austerlitz shows how Hunter’s death came to symbolize the end of an era while the trial of his accused murderer epitomized the racial tensions that still underlie America. He also finds a silver lining in the concert in how Rolling Stone’s coverage of it helped create a new form of music journalism, while the making of the movie about Altamont, Gimme Shelter, birthed new forms of documentary.

Using scores of new interviews with Paul Kantner, Jann Wenner, journalist John Burks, filmmaker Joan Churchill, and many members of the Rolling Stones' inner circle, as well as Meredith Hunter's family, Austerlitz shows that you can’t understand the ‘60s or rock and roll if you don’t come to grips with Altamont.


Praise For Just a Shot Away: Peace, Love, and Tragedy with the Rolling Stones at Altamont…

"This is a deeply researched and colorfully written account of the disastrous symbolic end to the 1960s." —Publisher's Weekly, Starred Review

"Critical and poignant, a thoroughly researched exploration of the ultimate price tag for the end of the 1960s." —Kirkus

“Highly recommended for anyone interested in the history of rock music.” —Library Journal

“A carefully constructed examination of an incident that changed the course of popular history.” —Booklist Starred Review

"Austerlitz brings multiple shadow players to centre stage over the course of a thoroughly researched text, knitting their stories together expertly and providing the reader with a sense of the pre-concert chaos, the mayhem while it took place and the strange cultural settlement afterwards." —The National

“This deeply researched book, full of human detail, is essentially a true-crime narrative, shedding light on the darkest, most troubling moment of the sixties counterculture and all that led up to it and followed from it. It is a riveting piece of documentary writing.” —Morris Dickstein, author of Gates of Eden and Dancing in the Dark

"Rough, sickening, blasted, detailed. The focus on Meredith Hunter and his family is heroic." —Greil Marcus

"Austerlitz has written the definitive account of this tumultuous moment in American music history." —Ted Gioia, music historian and author of Delta Blues and The History of Jazz

"Austerlitz offers an evenhanded insight into all the players. Especially welcome is the full portrait of Meredith Hunter, the doomed young man trapped in the maelstrom." —Andrew Grant Jackson, author of 1965: The Most Revolutionary Year in Music

"For anyone who wants to be reminded that rock ’n’ roll has always had a dystopian element, Altamont is never more than a shot away — “Altamont,” of course, being not just the name of a long-vacant speedway in Northern California but also shorthand for the end of the ’60s, the death of the counterculture and the ultimate correction to Woodstock idealism. That’s a lot of weight for one disastrous concert to cover, but Saul Austerlitz’s recounting re-establishes that the Dec. 6, 1969, show headlined by the Rolling Stones is still just about up to the sorry task." —SF Chronicle

SAUL AUSTERLITZ is a writer and critic. His work has been published in the Los Angeles Times, New York Times,Boston Globe, Slate, the Village Voice, The National, the San Francisco Chronicle, Spin, Rolling Stone, Paste, and other publications. He is the author of Money for Nothing: A History of the Music Video from the Beatles to the White Stripes (Continuum, 2007), and Another Fine Mess: A History of American Film Comedy (Chicago Review Press, 2010). He lives in Brooklyn with his wife, Becky.
or
Not Currently Available for Direct Purchase