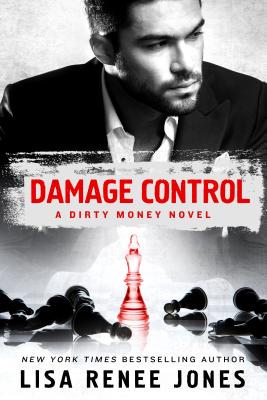 Wall Street meets the Sons of Anarchy in Damage Control, the smoldering, scorching next novel in the explosively sexy Dirty Money series from New York Times bestselling author Lisa Renee Jones.
The only thing more dangerous than a dark secret is a damaged heart…

Shane Brandon has been pushed to the brink, torn between his corrupt family and his explosive, all-consuming desire for Emily Stevens, who he now knows is not who, and what, she seems. Has he trusted the wrong person? Will she, not his brother Derek, be the ultimate destruction of his family Empire.
Emily tries to run from Shane, but he will stop her, confront her, force her to reveal all – one hot touch and kiss, at a time, under every intimate detail of who this woman is, and what she wants, is exposed. But as he tears away the dangers of the unknowns with the woman in his bed, and in his heart, The Martina Cartel, has set their sites on his company, his family, and the one piece of leverage they believe he won’t gamble with: Emily.

This is book TWO of FOUR in Shane and Emily's story.

"Lisa Renee Jones excels at creating powerful men and women who are determined to live life on their own terms, and fans will be immediately drawn to the dangerous world of Brandon Enterprises." - RT Book Reviews

"High-octane romance set above the glittering lights of Denver is enhanced by the dominance of a powerful man and the cunning sweetness of a woman who isn't cowed or swayed by his wealth." - Publishers Weekly

"Sure to leave readers desperate for the next installment.: - Kirkus Reviews

"Edgy, brilliant and all-consuming, Dirty Money is THE series of the year! Lies, danger, secrets,and a hero you will fall HARD for. A must read!" - New York Times bestselling author Katy Evans on Hard Rules

"...her impressive ability to captivate the reader by revealing only the slightest hint of the bombshell buried under the layers of her intricate story. I can't recommend this book enough." - Author A.D. Justice on Hard Rules

Since beginning her publishing career in 2007, Lisa has published more than 40 books that have been translated around the world. Booklist says that Jones's suspense truly sizzles with an energy similar to FBI tales with a paranormal twist by Julie Garwood or Suzanne Brockmann.

Prior to publishing, Lisa owned a multi-state staffing agency that was recognized many times by The Austin Business Journal and also praised by Dallas Women Magazine. In 1998 LRJ was listed as the #7 growing women owned business in Entrepreneur Magazine.