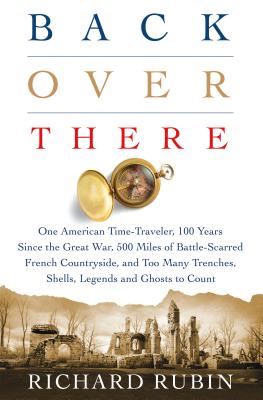 One American Time-Traveler, 100 Years Since the Great War, 500 Miles of Battle-Scarred French Countryside, and Too Many Trenches, Shells, Legends and Ghosts to Count

Based on Richard Rubin's wildly popular New York Times series, Back Over There is a timely journey, in turns reverent and iconoclastic but always fascinating, through a place where the past and present are never really separated.

In The Last of the Doughboys, Richard Rubin introduced readers to a forgotten generation of Americans: the men and women who fought and won the First World War. Interviewing the war’s last survivors face-to-face, he knew well the importance of being present if you want to get the real story. But he soon came to realize that to get the whole story, he had to go Over There, too. So he did, and discovered that while most Americans regard that war as dead and gone, to the French, who still live among its ruins and memories, it remains very much alive.

Years later, with the centennial of the war only magnifying this paradox, Rubin decided to go back Over There to see if he could, at last, resolve it. For months he followed the trail of the American Expeditionary Forces on the Western Front, finding trenches, tunnels, bunkers, century-old graffiti and ubiquitous artifacts. But he also found an abiding fondness for America and Americans, and a colorful corps of local after-hours historians and archeologists who tirelessly explore these sites and preserve the memories they embody while patiently waiting for Americans to return and reclaim their own history and heritage. None of whom seemed to mind that his French needed work.


Praise For Back Over There: One American Time-Traveler, 100 Years Since the Great War, 500 Miles of Battle-Scarred French Countryside, and Too Many Trenches, Shells, Legends and Ghosts to Count…

“A journey back to the French rural landscape where so many American soldiers fell during World War I…a fine on-the-ground account of some of the iconic battles…An eloquent dive into World War I cemeteries, monuments, mines, and trenches.” - Kirkus

“This is a fascinating book that brings to life the Great War’s brutal trench warefare its lingering presence in rural France...This remarkable work of journalism reminds us of the hardships of that war and the bravery of those called upon to fight it.” - The Missourian

“A century after the Great War, the battlefields of France are still littered with the evidence of the barbarous fighting--trenches, the abandoned foundations of destroyed villages, and shell fragments galore. But Richard Rubin doesn’t pursue this subject merely to give new meaning to the genre of ‘deep travel.’ This thoroughly researched and entertaining narrative refreshes our understanding of a tragic war and will be welcomed by anyone who enjoys good writing and history.” - Rinker Buck, author of The Oregon Trail: A New American Journey,and Flight of Passage

“Richard Rubin is a highly-skilled time-traveler whose passion and diligence make the haunted sites of the First World War yield up their amazing stories. By reminding us how real and how recent that war was he has produced an engrossing, important book.” - Ian Frazier, author of Great Plains and Travels in Siberia

"Delightful may seem like a strange word for a book about war – but it’s the word that came repeatedly to mind as I turned the pages of Richard Rubin’s narrative of his adventures on the French and Belgian battlefields where Americans fought in the Great War. With vast erudition and effervescent style, Rubin brings to life what the Doughboys endured “over there” a century ago and what he experienced as he retraced their footsteps." - David Laskin, author of The Family: A Journey into the Heart of the 20th Century and The Long Way Home: An American Journey from Ellis Island to the Great War

"Back Over There is a thoughtful, emotional, engaging journey into the rich and sometimes forgotten history of WWI." - Susan Orlean, author of The Orchid Thief

"Back Over There is journalistic magic, somehow travelling back in time 100 years without leaving the present, in order to bring us a graphic portrayal of our tragic participation in World War I, the Great War that cost 116,000 American lives, and the great legacy that lives on even now. Richard Rubin has traveled the battlegrounds and combat villages of France and has given us not only a graphic portrayal of the bloody battles in the trenches, in the villages and in the air where fighter planes dueled and bombs dropped for the first time, but a moving portrayal of the eternally grateful French people who keep the memory alive to this day.” - A.E. Hotchner, author of Hemingway in Love

“Richard Rubin has written a unique book--a combination of history and travelogue that restores the battlefields of WWI and the men who fought on them to remarkable, often heartbreaking life.” - Thomas Fleming, author of The Illusion of Victory, America in World War I

"It was called the Great War, and it brought America--and millions of ordinary Americans--decisively into the wider world for the first time. We would never be the same again. But our entry into the conflict was a century ago--knowledge and memories fade. A keen student of the war, Richard Rubin set out on a journey along what were once the front lines in northern France. With an eye for compelling and sometimes chilling detail--the graffiti scrawled in tunnels, the rusted ordnance turned up by ploughs, the lonely grave of the last American killed--he has produced a personal account of historical discovery that is human and haunting, and written with literary flair. The First World War, we come to realize, is both distant enough to evoke the clashes of antiquity and recent enough to feel like yesterday." - Cullen Murphy, author of Are We Rome?

RICHARD RUBIN (M.A.) was educated at the University of Pennsylvania and Boston University and began his career as a small town journalist in Greenwood, Mississippi. Since then he has written for rather larger outlets, routinely contributing to: The Atlantic, The New York Times, The New Yorker and AARP Magazine. He is the author of the books: Confederacy of Silence, and The Last of the Doughboys. He lives in Maine.
Loading...
or
Not Currently Available for Direct Purchase