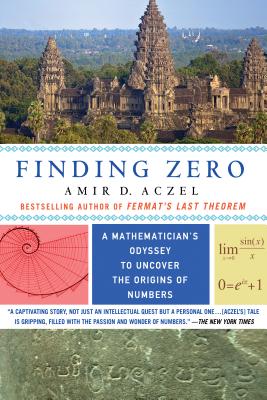 A Mathematician's Odyssey to Uncover the Origins of Numbers

The invention of numerals is perhaps the greatest abstraction the human mind has ever created. Virtually everything in our lives is digital, numerical, or quantified. The story of how and where we got these numerals, which we so depend on, has for thousands of years been shrouded in mystery. Finding Zero is an adventure filled saga of Amir Aczel's lifelong obsession: to find the original sources of our numerals. Aczel has doggedly crisscrossed the ancient world, scouring dusty, moldy texts, cross examining so-called scholars who offered wildly differing sets of facts, and ultimately penetrating deep into a Cambodian jungle to find a definitive proof. Here, he takes the reader along for the ride.

The history begins with the early Babylonian cuneiform numbers, followed by the later Greek and Roman letter numerals. Then Aczel asks the key question: where do the numbers we use today, the so-called Hindu-Arabic numerals, come from? It is this search that leads him to explore uncharted territory, to go on a grand quest into India, Thailand, Laos, Vietnam, and ultimately into the wilds of Cambodia. There he is blown away to find the earliest zero—the keystone of our entire system of numbers—on a crumbling, vine-covered wall of a seventh-century temple adorned with eaten-away erotic sculptures. While on this odyssey, Aczel meets a host of fascinating characters: academics in search of truth, jungle trekkers looking for adventure, surprisingly honest politicians, shameless smugglers, and treacherous archaeological thieves—who finally reveal where our numbers come from.


Praise For Finding Zero: A Mathematician's Odyssey to Uncover the Origins of Numbers…

“In his quest to find out whence the numbers came, Aczel crosses the globe, visiting India, Thailand, Vietnam and elsewhere…in weaving together mathematics and history with his personal explorations, Aczel enables readers to experience the joy of the chase.” —Scientific American

“In this combination of memoir, travelog, and philosophical musing, Aczel recounts his search for the origin of the numerals…Recommended for anyone who cares about the history of mathematics and science.” —Library Journal

“Readers...accompany Aczel as he tests the limits of coldly cerebral Western mathematical logic against the stunning eroticism of numerical thinking in Hinduism, and weighs the truefalse reasoning of Aristotle against the bewildering four-prong logic of the Buddha...An exciting personal adventure reminding readers of how much nothing really means.” —Booklist (starred review)

“Prolific mathematics writer Aczel leads a historical adventure that doubles as a surprisingly engaging math lesson...Readers may find themselves questioning Aczel's sanity, as his obsession with zero's origins drives him from one dead end to the next, but it's difficult to avoid being drawn into his quest with these rip-roaring exploits and escapades.” —Publishers Weekly

“"The author of the best-selling Fermat's Enigma (1996) and other popular books on mathematics and science takes readers through a history of zero and takes himself on a journey through the jungles of Cambodia to find its the earliest use. …the journey to zero is an adventure worth joining." –Kirkus Reviews ” —

“"The zero is the most precious mathematical legacy we have from medieval times. Without it, modern mathematics would be unthinkable. In this delightful book Amir Aczel engagingly explains its importance, while recounting his search for the earliest representation of zero” —and the drama that erupted when he found it." –Ian Tattersall, Curator Emeritus in the Division of Anthropology, American Museum of Natural History

“"Amir Aczel is the Indiana Jones of the mathematical world, taking us on an enthralling adventure to find out where our numbers came from." -Marcus du Sautoy, professor of Mathematics at the University of Oxford and author of The Number Mysteries” —

Amir D. Aczel is the bestselling author of Fermat’s Last Theorem, The Riddle of the Compass, and The Mystery of the Aleph, and a fellow of the John Simon Guggenheim Memorial Foundation.
Loading...
or support indie stores by buying on