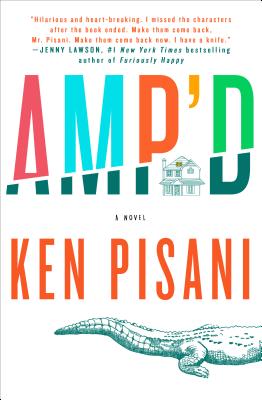 Ken Pisani's sharp and hilarious debut novel AMP'D tells the story of a man who returns to his boyhood home after his arm is amputated, forcing the most awkward of family reunions as he struggles to feel whole again and falls in love with a voice on the radio.

“Complete with painfully wry observations and delightfully caustic wit, this novel is a gritty exploration of what it's like to feel incomplete in the world. All five fingers up for this bitterly satisfying tale.” —Kirkus Reviews(starred)

Aaron is not a man on a hero's journey. In the question of fight or flight, he'll choose flight every time. So when a car accident leaves him suddenly asymmetrical, his left arm amputated, looking on the bright side just isn't something he's equipped to do.

Forced to return to his boyhood home to recuperate, Aaron is confronted with an aging father (a former Olympic biathlete turned hoarder), a mother who's chosen to live in a yurt with a fireman twelve years her junior, and a well-meaning sister whose insufferable husband proves love isn't just blind, but also painfully stupid.

As Aaron tries to make the world around him disappear in a haze of Vicodin and medical marijuana, the only true joy in his life comes from daily ninety-second radio spots of fun science facts: the speed of falling raindrops, batteries made out of starfish, and sexual responses triggered by ringtones - all told in the lush, disembodied voice of commentator Sunny Lee, with whom he falls helplessly, ridiculously, in love. Aaron's obsession with Sunny only hastens his downward spiral, like pouring accelerant on a fire. Pressured to do something - anything - to move his life forward, he takes the only job he can get. As a "fish counter" at the nearby dam, where he concludes that an act of violent sacrifice to liberate the river might be his best, final option.


Praise For Amp'd: A Novel…

“Amp’d is a lot like life—sad and funny and messy and weird, occasionally all at the same time. What really makes this novel work is Pisani’s ability to tell a good story, one that doesn’t heavily imbibe on worn out tropes or easy answers… [Pisani] shows what it means to be human and leaves us with the sense that even when everything in life has gone to hell, there are still plenty of reasons to laugh.” —Chicago Review of Books

"I don't like novels but I liked this one, which made me mad. And happy. Lots of mixed emotions here, if I'm being honest. Hilarious and heart-breaking. I missed the characters after the book ended. Make them come back, Mr. Pisani. Make them come back now. I have a knife.” —Jenny Lawson, #1 New York Times bestselling author of Furiously Happy

“This is the sound of one hand clapping for AMP’D. Profane, sweet, funny.” —Patton Oswalt, comedian and New York Times bestselling author of Silver Screen Fiend

“With lighthearted brevity and wit, Pisani manages to pull Aaron and his ragtag crew of friends and family through dark times—grief, depression, hopelessness, death, and even extinction—in the most entertaining and ridiculous ways.” —Publishers Weekly

“Complete with painfully wry observations and delightfully caustic wit, this novel is a gritty exploration of what it's like to feel incomplete in the world. All five fingers up for this bitterly satisfying tale.” —Kirkus Reviews (starred)

“Brilliant. Great prose, great characters-vivid and really, really different. I loved all the strange stuff. The circumstances were unique, and I really cared about the characters. Astoundingly good.” —W. Bruce Cameron,New York Times best-selling author of A Dog's Purpose and 8 Simple Rules for Dating My Teenage Daughter

“Darkly funny and highly entertaining, a perfect blend of humor and sorrow.AMP'D is the type of book that you ration out because you never want it to end.” —Dan Marshall, author of Home is Burning, an Entertainment Weekly Best Book of the Year, 2015

“All thumbs up. I admire the voice, the quirkiness of the situation, the quickness of pace, and the characters possess a tenderness that is saving. Amp'd falls into a tradition of voice: Vonnegut comes to mind, but so does J.P. Donleavy, Catcher in the Rye, Fear and Loathing in Las Vegas, A Fan's Notes. It feels like a modern novel with modern issues.” —Joseph Monninger, two-time NEA fellowship recipient and author of Eternal On The Water and The World As We Know It

“Alternately poignant and wryly funny . . . Pisani’s portrait of a disabled man self-deprecatingly embracing his own brokenness is oddly compelling and understatedly comical.” —Booklist

Ken Pisani is a television writer and producer, screenwriter, playwright, comic book author, former cartoonist, and now, a novelist. (Ken needs to learn how to focus.) He lives in Los Angeles with his beautiful wife Amanda, and is allergic to dogs.
Loading...
or
Not Currently Available for Direct Purchase